The iconic stadium suffered from unsafe structures, a poor pitch, a leaky roof and flying tiles. 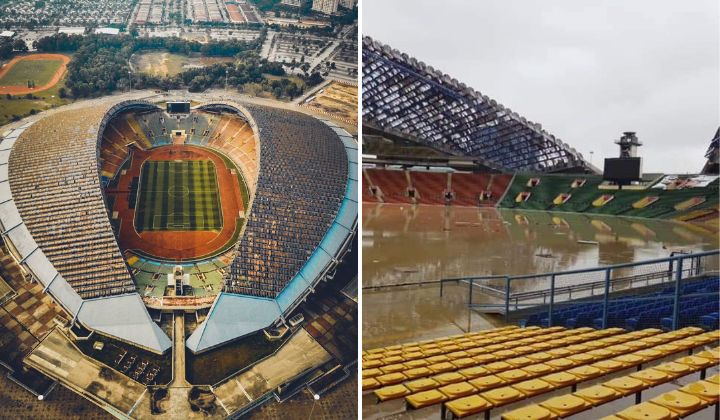 The Shah Alam Stadium, which has hosted many concerts and football matches, will get a long-needed facelift soon.

Selangor Menteri Besar Datuk Seri Amirudin Shari revealed that his administration had issued a letter of intent to MRCB after screening 15 other firms.

The restoration works will begin early next year and are expected to be completed by 2026.

The new stadium is inspired by the Ajax Amsterdam stadium (Johan Cruyff Arena). It will be able to seat some 60,000 to 70,000 spectators.

According to Free Malaysia Today, the construction firm was selected for its technical ability and financial standing.

Previously, MRCB was also involved in the restoration of the Bukit Jalil National Stadium in 2017.

The Shah Alam Stadium restoration project would be carried out through a private-public partnership with MRCB footing the cost and awarded a plot of land for development.

History of the Shah Alam Stadium

It was the biggest stadium in the nation until the completion of the National Stadium in 1998.

Stadium Shah Alam from above. The places for many of our memorable sporting moments and concerts 😉

Over the years, the Shah Alam Stadium reported major structural defects. Among the complaints are the poor pitch, a leaky roof and rotting structures.

Based on a report by Malay Mail, the roof tiles of the stadium were also falling and making it dangerous for spectators.

The condition of the stadium was unsafe and has forced the Selangor Super League team to move their home matches to the MBPJ Stadium in Kelana Jaya from 2021, NST reported.