Both admitted that they were involved in the incident on 9 July at the Tuas Second Link Immigration and Quarantine Complex (CIQ). 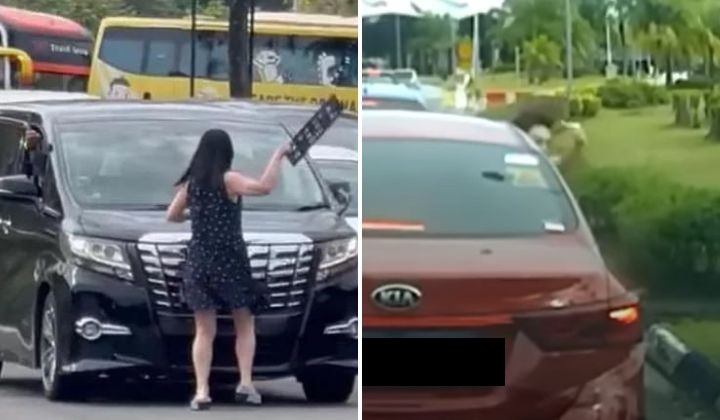 A man and a woman who tore the number plate of a Toyota Alphard at the Tuas Second Link Immigration and Quarantine Complex (CIQ) have been arrested on 14 July, Harian Metro reported.

Previously, Malaysian police had previously said they were looking for the duo for committing mischief.

Both suspects aged 46 and 18 years old admitted they were involved in the incident on 9 July.

The suspects were travelling in a red Kia Cerato with a Singapore plate when their car was scraped at the side by a Toyota Alphard.

The woman in the red Kia tore off the number plate from the Alphard and threw it at the car’s windshield.

Right after she did that, the man ran out of the Kia and shouted obscenities while making rude gestures toward the driver in the Toyota Alphard.

The whole incident was caught on video and the duos’ actions drew criticism from netizens.

Shin Min Daily News reported that the woman claimed her son was egged on by the Alphard driver to get out of the car.

She said the Alphard had repeatedly cut into their lane and they had been stuck in the traffic jam for about an hour.

She claimed that she wanted to protect her son so she got angry and pulled out the number plate.