The driver was initially believed to have run away from the scene of the accident on Monday. 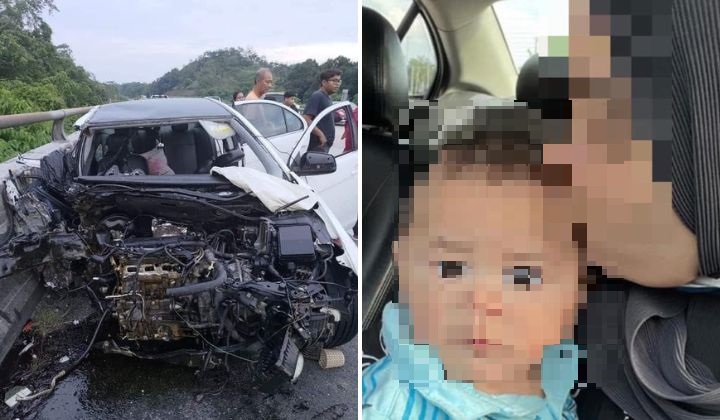 The BMW 330E driver who allegedly caused the road accident on Monday (11 July) at the Sungkai PLUS Highway has surrendered himself at the police station to help with the investigation.

Sinar Harian reported that the 30-year-old suspect turned himself in at the Gombak police station and had his statement taken in IPD Muallim on Tuesday night around 10pm.

The case is investigated under Section 43(1) of the Road Transport Act 1987.

What happened on Monday night?

A couple was travelling with their 4-month-old baby boy on the highway around 7.30pm in a white Proton Inspira when a dark silver BMW suddenly cut into their lane from the middle to the right lane.

This caused the 30-year-old driver of the Proton Inspira to lose control of his car, hit the side of the BMW and skidded before colliding with the metal road barriers in the middle of the road.

Sadly, the impact threw the baby in the car onto the road. The baby suffered broken bones in the thighs and hips and was bleeding in the brain.

The driver of the Proton Inspira suffered injuries on his right arm while his wife fractured her left ankle. Another 20-year-old male passenger miraculously escaped unhurt.

The BMW driver also made it out without injuries but his car reportedly sustained scratches on the car rims and the sides.

All victims were sent to Slim River Hospital while the baby was rushed to Hospital Raja Permaisuri Bainun (HRPB) Ipoh for further treatment.

Muallim police chief Superintendent Mohd Hasni Mohd Nasir said both vehicles involved in the accident will undergo Puspakom inspections and a chemical test to determine the ‘point of impact.’

Members of the public who witnessed or have recorded the accident are urged to come forward to help with investigations.