The suspect is a 41-year-old resident in Nara and a former marine. 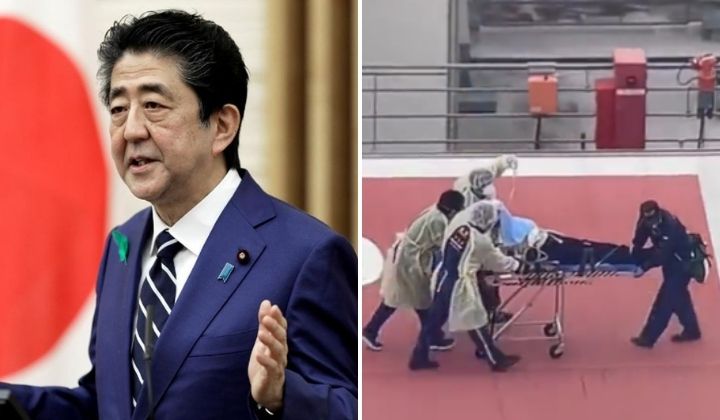 The former prime minister of Japan, Shinzo Abe, was shot today while giving a stump speech in the western city of Nara.

He was delivering a speech ahead of the upper house election around 11.30am today when sounds of gunshots were heard.

The latest update from Japan Times indicated that Abe has died from his injuries. He leaves behind his wife Akie Matsuzaki.

Prior to this update, Abe was reportedly shot from the back with a homemade shotgun and fell unconscious when he was rushed to Nara Medical University by helicopter.

Mr. Abe has been rushed to the hospital, according to sources.

He was given CPR on the spot but showing no vital signs as on now. pic.twitter.com/YPFKIt4gsg

High school students who witnessed the shooting said the suspect came up from behind and fired two shots.

Reports indicated that he suffered injury to the right side of his neck and bled from the chest.

Initial reports stated that he went into a cardiopulmonary arrest, a term used by the Japanese to indicate no vital signs were detected.

The suspect had been arrested

The suspect, 41-year-old Tetsuya Yamagami, was arrested on suspicion of attempted murder.

According to NHK, the suspect had been a Maritime Self-Defense Force officer for three years until 2005.

Yamagami told investigators that he had grievances with the former prime minister and had intended to kill him.

The weapon recovered at the scene and shown in footage appeared to be handmade with two barrels wrapped in black tape.

It was a despicable, barbaric act that happened during election campaigning, the foundation of democracy. It is an unforgivable act.

The assassination attempt shocked many people in Japan because the nation has strict gun controls and as such, shooting incidences are rare.

So from more photos coming out it does appear the gun that was used to shoot Shinzo Abe was a homemade double barrel shotgun. Incredibly crude but still capable of doing what it did. Pray for Shinzo. pic.twitter.com/HWcNWtTqwv

At Pavilion KL? Here’s What You Should Do At Tokyo Street