Being stuck on the road for hours and a prolonged lack of family time will not only take a toll on your body but also on your mind. 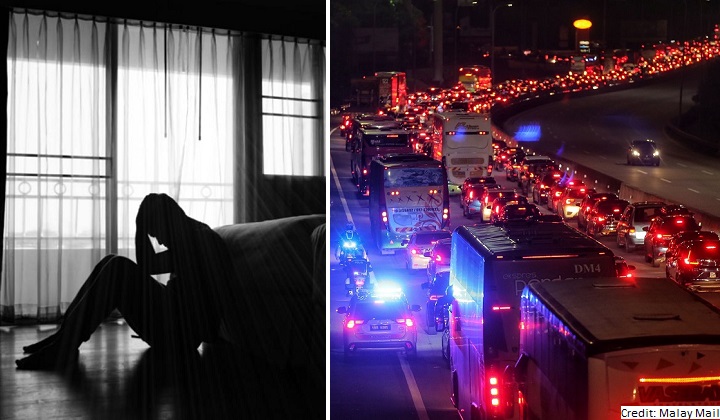 Living in Nilai but working in Kuala Lumpur, Aida had to travel 120-kilometre a day back and forth from her home to the office.

She had to leave as early as 6.15am to be in time to her office, and would only reach back home at 9pm, which by then her only child usually had fallen asleep.

In a month, Aida would be driving on the road for about 120 hours – equivalent to five days – which had been her routine since last April when the country began transitioning into the endemic phase.

The long hours on the road and lack of family time did not only take a toll on the civil servant’s body but also on her state of mind.

“There are times when I feel so stressed, I hear whispers, that I feel like crashing into the car in front,” Aida was quoted as saying by Bernama.

This, according to Universiti Malaya’s psychiatrist Associate Prof Dr Muhammad Muhsin Ahmad Zahari, could be caused by continuously getting stuck in traffic jams as it affected one’s mental health, which in turn could lead to depression and anxiety.

“The stress will increase if the person is often late for work and is reprimanded or given a warning by the employer, which in turn affects his/her emotion and work productivity,” said Dr Muhamad Muhsin.

He also added that prolonged stress could also lead to further complications including high blood pressure, heart disease and diabetes.

“This means having staggered working hours so that employees do not come to work and leave at the same time.

“Alternatively, we can also implement a rotation system that requires employees to be present in rotation in the office,” he added.

Dr Rozmi said by implementing flexible working hours, employers can help reduce stress while also helping to improve the quality of life of its employee as well as their mental well-being.

“After all, we went through it during the implementation of the Movement Control Order which required almost all organisations to adopt the work from home concept.

“This not only allows workers to give full attention to the tasks given because there is no need to commute to work and this can save time and work can be more productive,” he said.

The government introduced flexible working hours (FWH) for the civil servants in the country in 2019 – with civil servants may started working anytime between 7.30am to 9am and leave between 4.30am to 6pm – to complete one working day.

This is applicable to all states except on Thursday for Kedah, Kelantan and Johor with the civil servants in the states may choose to end their work day between 3pm to 4.30pm.

Meanwhile, the government announced that employees who want to work flexibly – be it on non-traditional working hours or days as well as from home or outside the office – can apply for the Flexible Working Arrangement (FWA) with their respective employers.

This is provided under the amendment to the Employment Act 1955 which will be effective on 1 September.

READ MORE: Get Ready Employees! You Can Request For Flexible Work Arrangements From Your Employer Starting 1 September

[Watch] Rapper Caprice Gives RM10k Worth Of Petrol For Free, It Caused A Traffic Congestion

Upset Stomach While Stuck In Jam? Here Are 5 Things You Can Do For Instant Relief