The road accident caused two out of three lanes to be blocked. 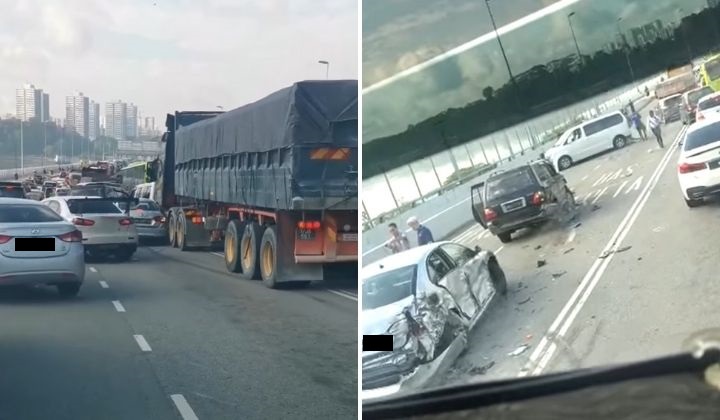 A lorry rammed into 11 vehicles on a packed road at the Johor-Singapore Causeway around 9.25am today (7 July).

The incident was captured on video that quickly spread online and shocked netizens.

In the video, the lorry carrying sand could be seen ploughing into a line of vehicles on the busy road before slowly coming to a stop.

The aftermath showed a number of vehicles that were crushed with a few Malaysian police personnel showing up at the scene.

Due to the accident, two of the three lanes along the Causeway were blocked. The Singapore Immigration & Checkpoints Authority (ICA) alerted road users to expect traffic delays.

It’s believed that there was a problem with the lorry’s brakes which was why it couldn’t be stopped in time when it got closer to the vehicles in front.

According to South Johor police chief Assistant Commissioner Raub Selamat, the accident involved 12 vehicles – a lorry, a bus, a van and nine cars.

Fortunately, Harian Metro reported that there were no lives lost in the road mishap and the vehicles involved reported minor damages.

The 34-year-old lorry driver has been arrested to help police with investigations according to Section 42(1) of the Road Transport Act 1987.

Based on ICA’s Facebook update, the blocked lanes were cleared and traffic returned to normal three hours after the accident around 12pm.