Police found 214g of ganja as well as 17 ganja plants inside his home when he was arrested on 24 March. 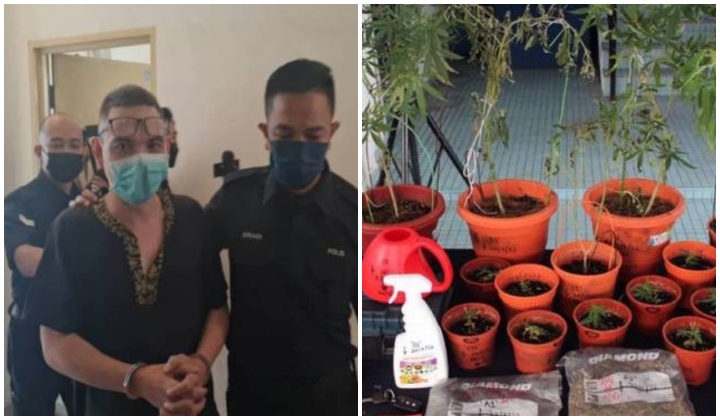 Nasyid singer and composer Muhammad Yasin Sulaiman can breathe a sigh of relief after he escaped the gallows as he was given a discharge not amounting to an acquittal (DNAA) for trafficking ganja by the Petaling Jaya Magistrate Court today.

According to mStar, Yasin, 47, expressed his gratitude for the ruling.

“Alhamdulillah, I am fine…I went through all the processes of the law and I am grateful for this decision,” he was quoted as saying.

The singer previously faced a possible death penalty sentence after he was charged with trafficking 214g of cannabis at a condominium in Kota Damansara, Petaling Jaya, on 24 March.

Magistrate Court Judge Iskandar Zainol however allowed the prosecution request to re-charge Yasin for the possession of 193.7g of ganja under Section 39A (2) of the Act at the Petaling Jaya Session Court.

Yasin pleaded not guilty when the charge was read to him in front of Session Court Judge Jamaluddin Mat.

He is facing imprisonment of five years to life and no fewer than 20 strokes of the cane if he was found guilty.

Yasin was also charged with cultivating 17 cannabis plants in his home.

For this offence, he was charged under Section 6B (1)(a) of the Dangerous Drugs Act 1952, which provides for life imprisonment and whipping of at least six strokes of the cane, upon conviction.

Yasin was arrested at his condominium unit in Kota Damansara on 24 March where the police found 214g of ganja as well as 17 ganja plants inside his home.

The dried leaves and plants were believed to be worth RM10,200 but the police investigation found that it was for personal use.

It was learned that Yasin, who had a history of drugs and mental issues, used social media to learn how to grow the plants.