The preacher and activist had voiced out against insensitive jokes that liken oil used for prayers by non-Muslims to low-priced cooking oil. 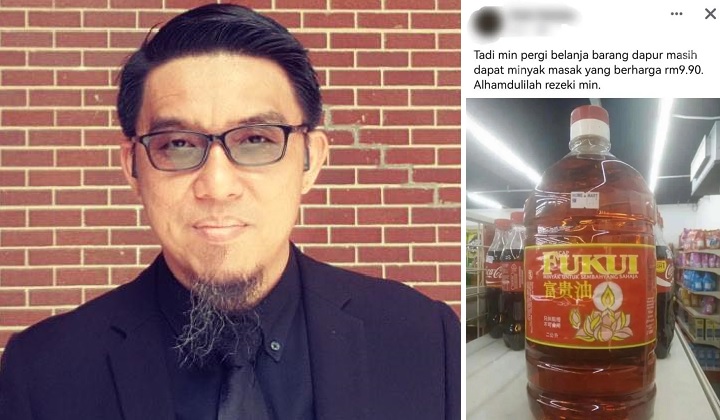 Malaysians have started to feel the pinch due to inflation which directly contributed to the rise of good prices as well as the cost of living.

Many people take it to social media to vent their frustration over the matter, with some posting the prices of goods that were sold in supermarkets and sundry shops.

Cooking oil, one of the essential items of each household, has seen its price increase in recent months especially after the Russia-Ukraine war broke out.

However, recently, a Facebook page posted a picture of bottled oil that was used for prayers by non-Muslims, claiming that it was low-priced cooking oil.

This despite the label of the oil clearly stating that the oil is used for prayer purposes.

Preacher reprimanded Muslims not to lie even for a joke

Responding to the viral post, preacher and activist Firdaus Wong Wai Hung said that while he understands the predicament felt by the public due to the rise in living costs, he reminded Muslims that it is forbidden for believers to lie even if it’s for joke purposes.

Firdaus quoted a hadith by Abu Daud that says: “Woe to the one who talks about something to make the people laugh, in which he lies. Woe to him! Woe to him!”

He also added that the packaging of the oil clearly states that the oil is used for prayer purposes only, and he believed that the admin of the Facebook page shouldn’t have any problem understanding it.

“We do not like people to insult Islam or joke with equipment that is synonymous with Islam such as songkok, kopiah, telekung, sejadah and so on, so we should not joke about the prayer tools of other religions,” he wrote on his Facebook.

The public agrees with Firdaus

Meanwhile, in the comment section, the majority of the commenters agree with Firdaus, with some Facebook users describing the joke as rude.

There are also those who thank Firdaus for voicing out on the matter and reprimanded the Muslims in the country to be more sensitive to others.