He is the first South-East Asian wrestler to appear in the US-based show. 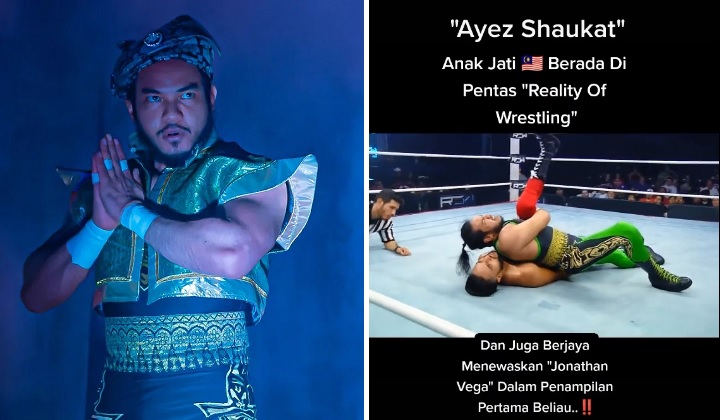 Professional wrestler Ayez Shaukat-Fonseka Farid recorded a winning debut in the Reality of Wrestling (ROW) show based in Houston, Texas.

In his first match, Shaukat, appeared in front of the audience clad in green songket together with a tanjak, which was designed by Paul Carling, a costume designer from Sarawak.

The Malaysian wrestler took over four minutes before he defeated Jonathan J Vega, prompting the show’s announcer to state that Shaukat had made an impressive debut in the show.

He is also the first South East Asian wrestler to appear in ROW. The show, which is only available in United State’s The CW channel, is owned by two-time WWE Hall of Famer, Booker T.

Taking it to Facebook, the multi-talented Shaukat said that he is thankful for the confidence that was shown to him by the production team as he is entrusted to be one of the hero character in the show.

Shaukat, who is also an actor and director, said that he had accepted the offer to appear in the wrestling programme since 2020 but his debut was delayed owing to the constraint in obtaining visa due to the Covid-19 pandemic.

He finally went to US earlier this month for two weeks to record six episodes of the show at the World Gym Arena Stadium, Texas.

Commenting on his choice of wardrobe, Shaukat said that he wanted to promote “the identity and image of the Nusantara to the eyes of Hollywood.”

While he is proud of his achievement to penetrate the US entertainment market, he however lamented the lack of opportunities that he received in Malaysia, adding that he is usually the last pick for any role or will only be given a call by the production team if the budget is low.

“Regardless, I’m proud to appear on USA TV (show). Alhamdullilah, although I’m not appreciated here, I’m still being held in high regards overseas,” the founder of Professional Wrestling (Malaysia) and Director of APAC Wrestling wrote on his social media account.

Shaukat had in the past appeared in the telefilm Budak Lorong and also have a role in ‘Juvana 2’ and ‘Juvana 3’ movie. He is also an actor and assistant director of the film Gila Gusti and a short film titled Taruh.

He too had experience directing an English film titled ‘Dark Eye’ for Amazon.