The Kebun-Kebun Bunga has been served with a final eviction notice by the Federal Territories Land and Mines Office on 23 June. 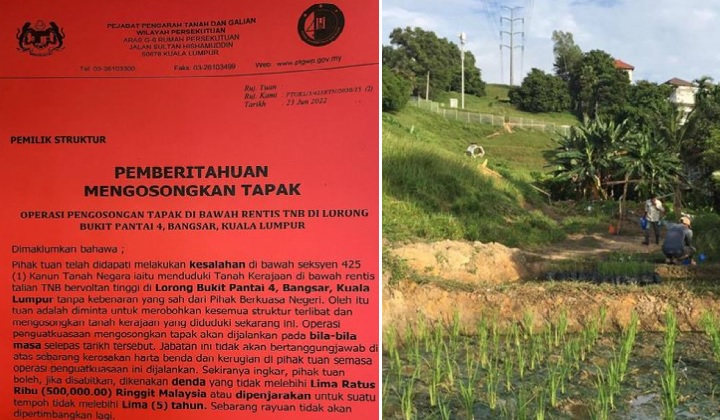 While there are some that sympathised with the Kebun-Kebun Bangsar’s plight, there are also those that believed that nobody is above the law and that the community garden should be closed for violating its temporary occupancy licence (TOL) for nursery purposes.

“Actually there shouldn’t be a problem to operate as long as there is permission and paid the TOL fees to TNB (if I’m not mistaken). The (eviction) letter also stated, (that it is operating) “without legal permission”. There are a lot of nurseries operating under electric pylons in Wangsa Maju but with permission as they have been there for decades,” wrote one Twitter user @HasliAlias.

Another Twitter user @naziaty claimed that Kebun-Kebun Bangsar is not a community project as it’s actually an individual enterprise with two staff maintaining the garden.

She also said that the surrounding residents protested the garden’s operation.

Like I said, the residents around it made complaints. I personally know one person who live there. I would rather cite Happy Mansion Sect 17 PJ garden allotments as truly a community project. Kebun2 Bangsar is an individual enterprise with 2 workers tending the place.

Meanwhile, @arayualan suggests for the public to verify the news and understand the real situation before jumping to any conclusion.

For activist Hayati Ismail, Kebun-Kebun Bangsar community project should be used as an example by the authorities which can be emulated and carried out at the People’s Housing Project (PPR), to help fight the rise of living costs as well as inflation.

She added that she often brings her children to visit the community garden as it offers a unique experience to visitors.

Hayati also added that there is no issue for the project to remain at the same site since the land is reserved for TNB and under electric pylons.

“I am sure that no house or office can be built there,” she wrote on Facebook.

Tertarik no use when there's no support from govt. KKB just got threat from PTG WP to shut down. Previous permission given by TNB. All the funds contributed by community will go to waste. pic.twitter.com/oM5czjxccp

The Twitter user said wrote that there’s no point for Ismail to be in awe of the community project if there is no support from the government.

The community farm, which has caught the attention of Prime Minister Datuk Seri Ismail Sabri Yaakob earlier this month yesterday posted on its Instagram that it has been served with an eviction notice on 23 June.