Luckily the car driver behind them was alert to the situation and slowed down the vehicle. 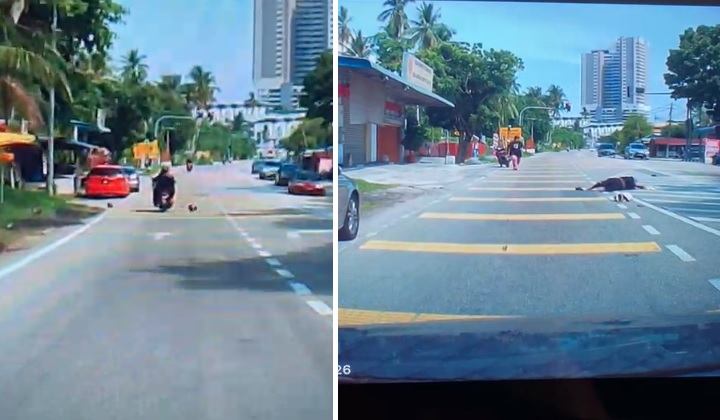 A female pillion rider cheated death after she was hit by a coconut that fell from a tree alongside Jalan Teluk Kumbar, causing her to fall from the motorcycle she was riding with her daughter at about 3.30pm on Sunday.

The victim, only known as Anita, suffered from a broken right shoulder bone, a broken left arm as well as a rib injury due to the incident, which was also caught on video and had since gone viral.

In the 28-second video clip, the woman is seen being hit by a fallen coconut as the motorcycle was moving.

The impact caused her to be thrown off the moving motorcycle, losing her helmet in the process before lying in the middle of the road.

According to Berita Harian, the woman is currently receiving treatment at the Penang Hospital (HPP), while her daughter was left traumatised by the incident.

Meanwhile, the Malay daily reports also stated that Bayan Lepas assemblyman Azrul Mahathir Aziz said that the Penang City Council (MBPP) will cut down 11 coconut trees as well as examine other risky trees alongside the road to prevent the same incident from recurring in the future.

A witness of the incident, Md Ghazali Shahari, 62, said that he heard a loud scream from the victim while he was tending to his customers at his durian stall when the incident occurred.

“The road was quite busy at that time and together with several other people we immediately halt the traffic,” he said.

Md Ghazali added that while it was not unusual for coconut to fall on the roadside at the accident’s spot, he said that the coconut never hit moving vehicles before.