Zuraida was seen entering Bangunan Perdana Putra ahead of today’s Cabinet meeting at 9.25am today. 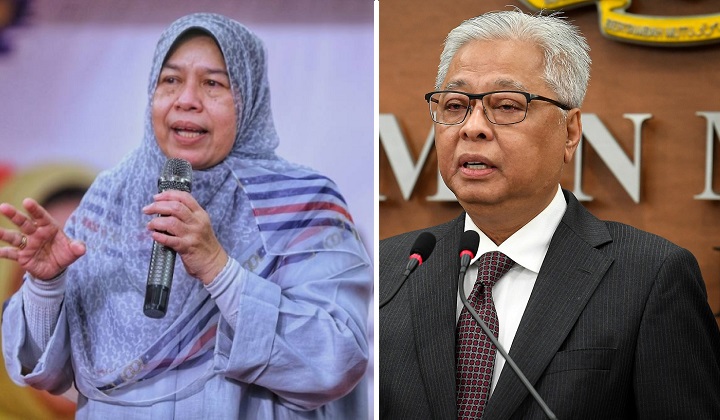 According to the report, it is understood that Zuraida had met with Ismail yesterday evening to discuss her position after her recent switch from Parti Pribumi Bersatu Malaysia (Bersatu) to Parti Bangsa Malaysia (PBM).

The Malay daily report also stated that Zuraida was seen entering Bangunan Perdana Putra at 9.25am, indicating that she attended today’s Cabinet meeting which was traditionally held every Wednesday.

Zuraida assumed the Cabinet post while she was part of Bersatu, after leaving PKR following the Sheraton Move in 2020 which led to the fall of the Pakatan Harapan government.

Bersatu is adamant to retain the post, with its President Tan Sri Muhyiddin Yassin saying that the post belongs to the party as per stated in the agreement between the prime minister and the Perikatan Nasional pact.

Muhyiddin had yesterday said that he had waited for the past two weeks to meet with Ismail to discuss Zuraida’s replacement for the Cabinet post.

Zuraida meanwhile had also expressed hope to retain the post, citing that the move would ensure continuity in the programmes planned by the ministry.

Zuraida, who is also the Ampang MP, had on 26 May announced that she is leaving Bersatu for PBM while she was on a working trip in Turkiye.

In the same statement, she also expressed her willingness to relinquish the Cabinet post that she held.

Following her announcement, Muhyiddin said that he will be proposing a new name to replace Zuraida, insisting that the Plantation Industries and Commodities minister post belongs to Bersatu, which is also part of the current ruling government.

However, upon her return to Malaysia, Zuraida said that only the prime minister can decide on her minister’s post.

Upon her acceptance into PBM on 10 June, Zuraida was named as the party’s president-designate and was tasked to lead the party’s discussion with other political parties in preparation to face the upcoming general-election.