The woman found out that the young boy was asked by his father to skip school to sell the mushrooms. 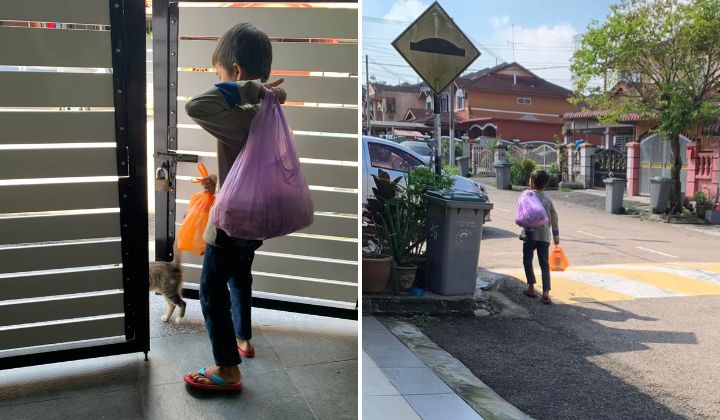 A Facebook user Rosmaliana Roslan shared her sadness when she was greeted by a young boy who tried to sell her some oyster mushrooms last Sunday.

At first, she refused to buy them from the boy but he continued waiting outside her house in Kota Masai, Johor, and greeted her every time he saw her.

When she realised it was a young boy, she took pity on him and asked whether he had food. He told her he didn’t eat yet.

I asked whether he wanted to eat and he said yes. I invited him into the house to eat fried kuey teow that I made earlier for breakfast. Alhamdullilah he finished it all.

While he ate, she found out that he is currently in Standard 6 but his father told him to skip school that day to sell some mushrooms.

She found out that the boy’s family lives in Cahaya Baru, Johor. His father works with Rela while his mother works in Pahang and returns once a week.

He has another sibling who’s in Standard 5 and is also selling mushrooms in another area.

According to Free Malaysia Today, the young boy said he sold mushrooms from Wednesday to Saturday but since they still have supplies, his father told him to sell them on Sunday which is also a school day in Johor.

Rosmaliana felt touched because the young boy was about the same age as her son and was trying to help his family at a young age.

She encouraged people to buy mushrooms from the young boy if they meet him to help him out.

She added that the authorities should investigate to find out the family’s condition and to see if they can help the family.

Netizens’ reactions to the Facebook post varied. Some of them pitied the young boy for behaving like an adult at a young age to help support the family and expressed worry that something untoward could be happening behind the scenes.

They also believe the young boy should be allowed to go to school and the father should be the one doing the selling instead.

Others also encouraged people to buy from young sellers like the boy just to help them out.