Police also found a carcass of a cat at his home when arresting him yesterday. 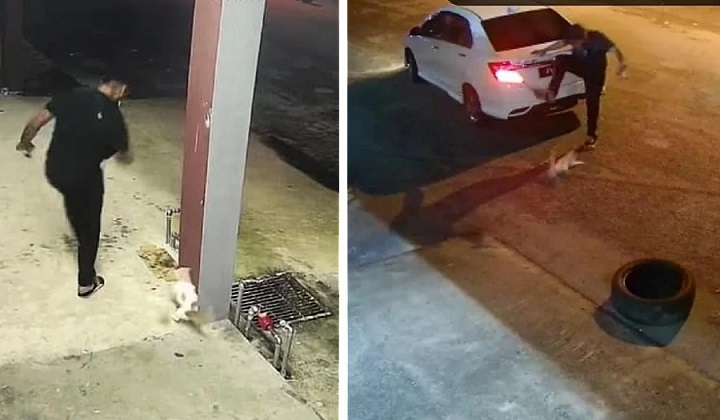 A 27-year-old jobless man who was caught on a close-circuit television (CCTV) camera abusing stray cats near a home improvement retailer store in Semeling, Kuala Muda, Kedah has been remanded for three days.

The recording of the incident, which occurred on 1.30am last Saturday nearby a MR. DIY retail store had since gone viral on social media.

In the video, the suspect was seen alighting from a white Perodua Bezza before approaching a stray cat with some food.

However, while the cat was feeding on the food, the man suddenly threw a stone at the cat’s head which caused the cat to shake violently on the ground due to the pain. The man then was seen driving away from the location.

In another video, the man was seen feeding another stray cat before he kicked the animal causing it to run away.

Kuala Muda police chief Assistant Commissioner Zaidy Che Hassan in a statement yesterday said that based on the initial investigation, the suspect was said to be suffering from an emotional breakdown after being left jobless.

According to Zaidy, the suspect’s family members claimed that he was a cat lover and had previously owned several cats which he takes care at his home.

Zaidy also said that a carcass of a cat was found at the suspect’s house when the police made the arrest. He however said that it does not belong to the abused cats that was seen in the viral video.

The case is being investigated under Section 428 of the Penal Code for animal abuse.

The suspect is facing a jail term of up to two years or fine of up to RM100,000 or both, if found guilty.

Netizens meanwhile slammed the suspect for his behaviour and urge the authorities to mete out fitting punishment for his bad deeds.