Inspector Mohd Farhan Zahari died on the spot after falling over his motorcycle before being ran over by a lorry which was heading in the same direction. 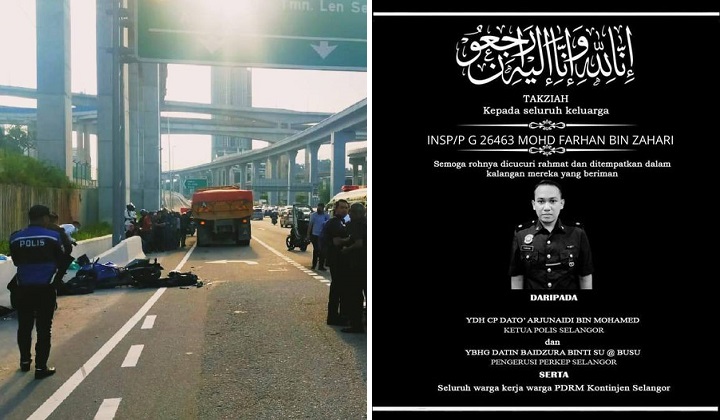 A police inspector died on his way home after falling from his motorcycle before being run over by a lorry at KM11 Grand Saga highway yesterday, Sinar Harian reported.

Mohd Farhan Zahari, 28, who was attached to the Subang Jaya district police headquarters Criminal Investigation Department, died on the spot after sustaining serious injuries following the freak accident which occurred at about 4.45pm.

Selangor Traffic Investigation and Enforcement Department chief Superintendent Azman Shari’at said that based on preliminary investigation, Mohd Farhan was on his way home in Gombak after attending a course at the Royal Malaysia Police College in Cheras.

“When approaching the location, Mohd Farhan tried to overtake the lorry which at that time was on left road shoulder but due to the sandy road condition, he loses control of his motorcycle and fell in front of the lorry’s tyre,” Azman was quoted as saying by the Malay daily.

He also added that the lorry, driven by a 30-year-old man was heading towards the Jalan Kuchai Lama and were travelling on a valid lane prior to the incident.

Farhan’s remains were brought to the Serdang Hospital for post-mortem.

The vehicles involved in the accident are taken to the Kajang district police headquarters for inspection while the case has been classified under Section 41 (1) of the Road Transport Act 1987.

ASTONISHING: M’sian police officer helps deliver a baby in a taxi while on duty