She also found out that the children were all left on their own in the room without adult supervision. 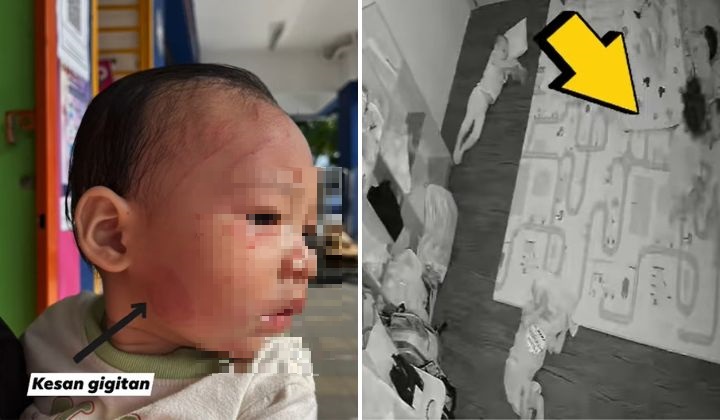 Facebook user Lidiya Izam shared her painful experience as a mother when her child sustained scratches at preschool about two to three months ago.

She received a Whatsapp message from the preschool principal who informed her that another child scratched her child’s face when they were drinking milk.

The principal apologised on behalf of the teachers who weren’t able to separate the two children in time. Lidiya was also told that the teachers applied ice and ubat gamat on the wounds.

The principal said a teacher went out of the room to make milk for the children while another teacher went for prayers.

Lidiya initially thought a teacher was in the room with the children based on the principal’s words, but the CCTV recording revealed the truth.

The video dated 1 April 2022 showed no teachers in sight in the room while a child seemingly poked and pushed Lidiya’s child. The child then brazenly climbed and lay down on Lidiya’s child, who couldn’t fight back.

Lidiya only realized the bite mark on her child’s face when she went to get her child from school.

Due to the video evidence, Lidiya felt the teachers were trying to cover up their negligence with an allegedly embellished story.

She said until today, none of the teachers contacted her to follow up on the matter.

Although she felt heartbroken, she advised other parents to be careful when choosing a preschool for their children. She urged parents to check the school’s background and conduct interviews with the teachers before signing up their children.

Netizens felt sorry for Lidiya’s child after seeing pictures of the wounds and expressed hope that the child had recovered.

They also wondered why the child’s cries didn’t alert any of the teachers and urged Lidiya to lodge a police report or get the school summoned by the authorities.