The Bukit Jalil National Stadium flooded field during the 2023 Asian Cup qualifiers brought up many questions. 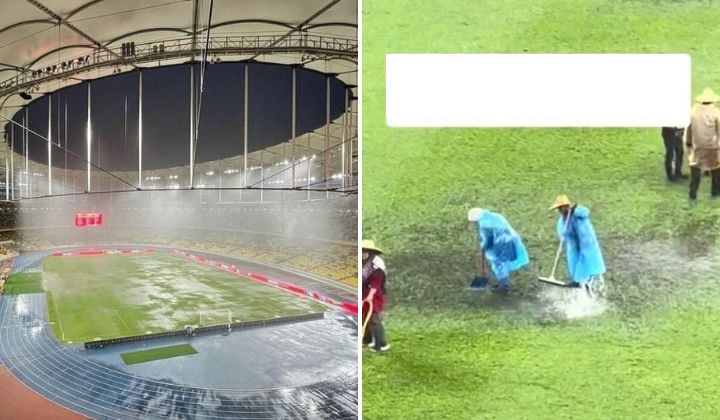 The 2023 Asian Cup qualifiers at the National Stadium in Bukit Jalil between Malaysia and Bahrain yesterday night was met with a heavy downpour.

The water-logged field soon overshadowed news of Malaysia’s loss to Bahrain in the rain aftermath, and it drew plenty of opinions about the build of the stadium.

Netizens pointed out the poor field drainage system and lamented that the billions of ringgit used to upgrade the national stadium seemed wasted.

A few of them blamed the former sports minister Khairy Jamaluddin since the upgrading works supposedly took place during his time in office.

They also claimed that corruption was the leading cause of the poor work done at the stadium. A netizen added that developers should learn from those who build golf courses.

To @Khairykj . You were the sports minister during the mega face lift of Bukit Jalil Sports Complex pic.twitter.com/2iDYuheARK

A decent standard 18-hole golf course probably spends less than half percent of that amount to make all its fairways playable after a heavy shower. This field is just about the size of one par 3 fairway.

The situation turned slightly comical when a viral video allegedly showed the ridiculous way workers were made to drain the field.

A small group descended on the flooded field armed with a hose, a dustpan and a broom to sweep or suction away the excess water. The problem was the excess water returned to whence it came.

What happened with the mega facelift?

In May 2015, Malay Mail reported that the National Sports Complex in Bukit Jalil was set to be given a RM1 billion facelift spearheaded by the Malaysian Resources Corporation Berhad (MRCB). The goal was to turn it into a Sports City and host the 2017 SEA Games.

The whole project was allegedly said to be modelled after the S$1.33 billion (RM3.6 billion then) Singapore Sports Hub and Dubai Sports City, complete with multi-purpose sports facilities, a shopping centre and restaurants.

Some of the areas that badly needed uplifts were the seats, the pitch, and corporate boxes. Even the security features were improved.

The refurbishment paid off for some time with the stadium winning international accolades. The KL Sports City won the Exterior Lighting Design Award at the Asia Pacific Property Awards 2018-2019 while the Bukit Jalil National Stadium was named 2018 Stadium of the Year at the World Stadium Congress Awards in Amsterdam.

Based on what happened last night, perhaps the sports complex is due for another refurbishment.