The victims were two sisters and their cousin. 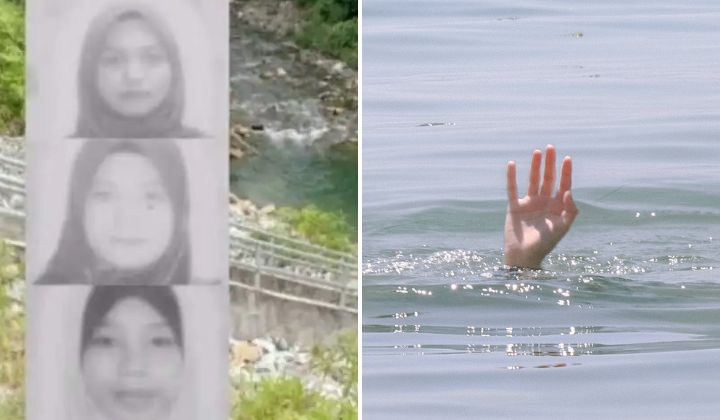 A family picnic at Sungai Lata Changkah, Ulu Seladang in Setiu, turned disastrous when three women drowned in the river on Friday, 10 June.

The Malay Mail reported that the trio was picnicking with their families around 2.30pm when one of them slipped and fell.

While falling, she clutched two of her companions, who fell along with her. The public jumped in to rescue them and sent them to Setiu Hospital about 45 minutes later.

Unfortunately, all three were confirmed dead at the hospital. They were identified as Syaridatul Nurfatihah Mohd Dera, 28, her sister Syariatul Noor Safiqa Mohd Dera, 26, and their cousin Siti Aishah Mazalan, 19.

The Star reported that all three have been buried in a common grave together at the Kampung Hilir Maras Muslim cemetery near Bukit Rakit on Saturday, 11 June, at 4am.

Police investigation revealed that the family picnicked at a sheltered and sloped area that’s out of sight from the road.

The police advised the public to be more careful when they go on a picnic by the river and to avoid risky places such as hidden spots. The public should be wary of strong river currents too.

What happened prior to the drowning?

The mother of the two sisters, Sarimah Awang, 62, said she and several members of the family were also at the picnic but left earlier to their home in Kampung Hilir Maras.

When she reached home, she received a call from an individual telling her to call the Fire and Rescue Department.

I thought a fire had broken out but it turned out that my children and niece drowned. I do not know who fell into the water first. But I was made to understand that my eldest daughter (Syariatul Syafira) wanted to help them but she almost drowned too.

Fortunately, her eldest daughter was saved and is now receiving treatment in a hospital. Sarimah said she was still in shock but accepted the loss of her fourth and youngest child as fate.

She also shared that the three victims had been close since childhood and often spent time together. The family also often visited Sungai Lata Changkah for picnics before this tragedy happened.