The netizen claimed there was only one officer working since 8.30am. 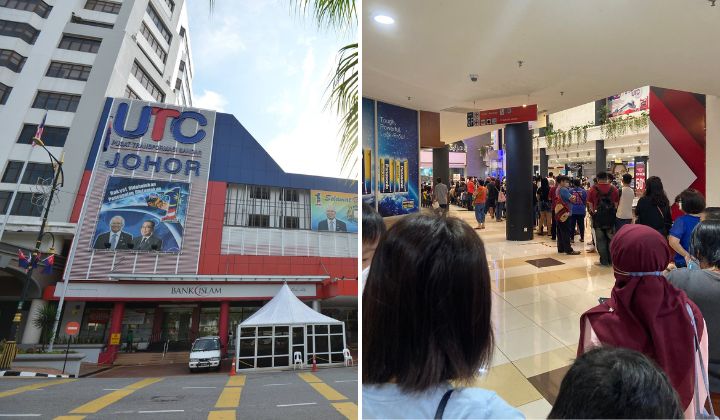 About four weeks ago, Menteri Besar Johor Datuk Onn Hafiz Ghazi promised the public that they won’t have to form a long queue at UTC Kotaraya.

Malaysia Gazette reported that he said there would be more counters and waiting areas set up.

From 11 May 2022 onwards, passport renewals can only be done online except for some special cases in order to lessen queue times.

READ MORE: How To Renew Your Malaysian Passport Online

However, netizens report that the situation still remained the same despite the early promises.

A Twitter user Haikal (@hxikxl) shared several images online to show the long lines snaking through UTC Kotaraya around 8.30am yesterday, 8 June. He said he was there to collect his passport.

What time does the immigration officers in UTC Kotaraya start work? It’s 8.30am but only one person is working at the counter to attend hundreds of people. There were lots of officers when YB visited that day. Today there’s no one. Did everyone get laid off?

Haikal also claimed that he waited in line until 11am and the queue didn’t move.

He jokingly said that by the time he gets his passport, it would have expired because the queue took 5 long years.

Due to the agonizing wait, Haikal decided to return home and try again another time before he has to return to Singapore.

Worse come to worse, he might have to use his birth certificate to enter Singapore.

Netizens criticised the service at UTC and said it’s not a surprise to see the employees there putting on a show for the minister during his visit.

Another netizen suggested others renew their passports at Kukup because it allegedly takes about 1.5 hours to get everything done.

Pls go to kukup. It can be done within 1.5 hrs . If collect Shd even be faster .Travel time depending where you live,at most 3 hrs pergi balik dah ada passport .( including waiting time at the office )