Graphic designer Shahrul fell for the scam online but managed to track down the scammer through the SSM website. 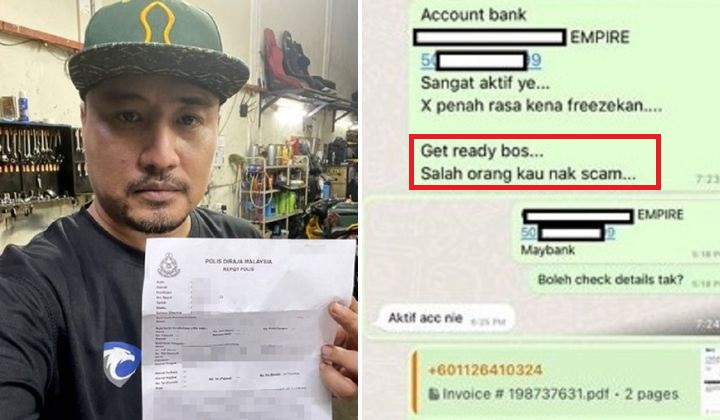 What’s sad but true is that despite the numerous scams out there, the scammers always get away with it.

However, one scammer got more than he bargained for when he scammed a stubborn victim.

According to Free Malaysia Today, graphic designer Shahrul Ashraf Sallehuddin, 38, came across a Facebook listing of a Sharp R32 1HP air conditioning unit for the price of RM270 on 25 May.

The price was reasonable to him so he placed an order on the listing posted by a Facebook user named Isaac Chooi and was asked to pay RM570 in advance.

The first payment was received under a company’s name so it didn’t raise Shahrul’s doubts. He even received an invoice for the transaction.

However, he couldn’t contact the seller after making the remaining payment. Shahrul quickly lodged a police report but wasn’t able to track down the scammer.

The police told Shahrul that it’s usually difficult to recover the money lost in scams like these because they can’t do anything. The other option is for Shahrul to go to a tribunal.

Getting the money back

Shahrul was determined to get back his money, so he began tracing the details of the bank account owner through the Companies Commission of Malaysia (SSM) website.

Once we get the information from SSM, we can easily get the name, address and identification card number of the company owner.

With all the details in his hand, he contacted and ‘provoked’ the scammer through Whatsapp.

He sent a copy of the SSM and IC number to the scammer and threatened to make a police report so the scammer’s bank account could be frozen.

I said ‘You scammed the wrong person.’

His comment drew the attention of nine other victims, and they formed a Whatsapp group together.

It didn’t take long for an individual to contact Shahrul and claim that his bank account has been misused by someone he didn’t know.

The bank account owner promised that he would return all the victims’ money because he’s afraid that all five of his bank accounts will be frozen.

The ‘scammer’ insisted that he was also a victim. Shahrul and the other victims didn’t fully believe the scammer’s story but played along so they could get their money back.

In two days, the scammer repaid everyone’s money totalling RM8,580. The scammer told them that he had lost RM16,000 but didn’t provide further details.

Shahrul said he was grateful that he managed to recover his money but hoped for a more proactive action from the police.

The bank account (of the scammer) should have been frozen if there are more than three police reports lodged. If the suspicious account isn’t closed quickly, the scammer will go on cheating other victims.

How to prevent from getting scammed?

The first thing to remember is not to share or reveal your personal details online, in a phone call or on messaging systems.

If an allegedly official-sounding organisation or personnel contacts you, it’s safer to deal with the issue in person at the actual office or headquarters.

Last but not least, it’s always safer to ignore calls from unknown numbers or calls that demand a lot of money from you.

READ MORE: “It’s A Scam” Beware Of Calls From Unknown Numbers With Music In The Background

Man Recovers 95% Of Money Stolen From His Savings Account