The woman allegedly blocked the road because she doesn’t like the noise from the cars and children playing. 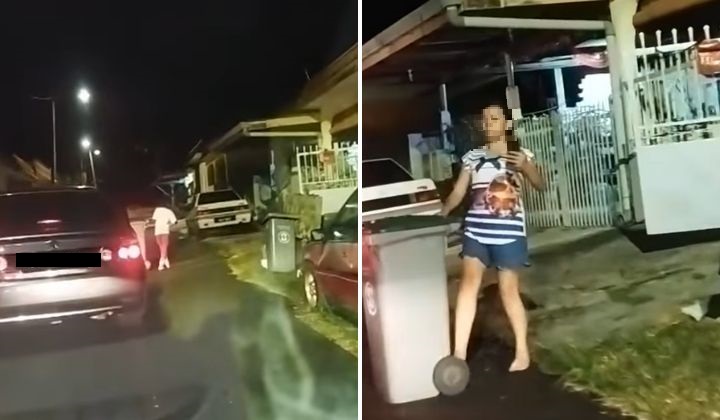 Have you ever had a selfish neighbour who imposed their own rules in the neighbourhood without caring about others?

A recent viral video showed a woman who blocked the road in front of her house with a rubbish bin in Taman Datin Fatimah in Melaka.

The rubbish bin was placed near the middle of the road and it made the road narrow enough to be impassable for cars.

As shown in the video, a line of cars had difficulty passing the road and formed a long queue in the residential area.

A young girl pulled the rubbish bin to the side of the road to let the cars pass. However, a woman standing nearby pushed the bin back to its place, blocking the second car’s path.

The woman looked smug and proud of her actions when the driver panned his camera at her.

Why did she do that?

According to the post caption, the woman allegedly blocked the road with the bin because she was bothered by the many cars passing by and disturbed by the sound of children playing in the area.

The netizen who shared the viral video said that the woman’s action and reasoning were unreasonable yet amusing.

We already know we’re living in a residential area so there must be some tolerance. It’s normal for cars to pass through. Are we supposed to close the back lane when all 44 of my nephews and nieces gather at my mother’s house here? The road in front of my mother-in-law’s house is also frequented by people moving to and fro from the mosque. Are we supposed to close that road too?

Netizens also found the woman’s behaviour strange and suggested residents report it to the authorities.

They even questioned why she chose to live in a residential area if she didn’t like the noises.

Netizens also surmised maybe she thought the road in front of her house belonged to her alone.

Hopefully, the residents in the area will be able to resolve the issue with the woman peacefully.