The elderly bus passenger got off at the wrong stop and left his wallet on the bus. 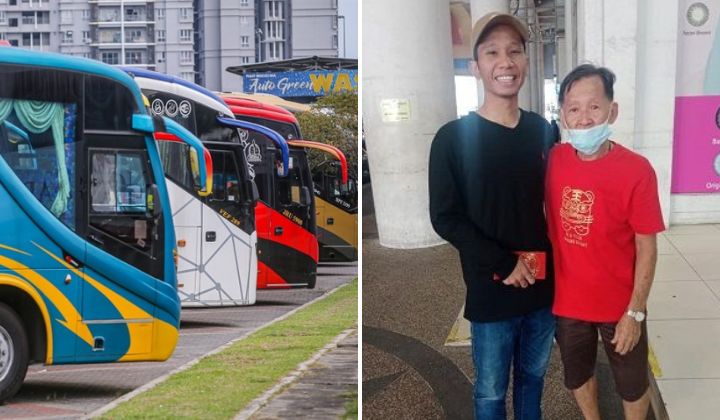 80-year-old Choo Liang Sin’s first interstate bus ride alone on 27 May took a turn when he got off at the wrong stop.

Fortunately, a good Samaritan known as Yusof, who sat in the row next to him on the bus, noticed the wallet and called the bus company, hoping to return it to Choo.

According to The Star, Choo’s niece Choo Chau Peng, 56, said the company managed to connect them about an hour later because her cousin, who bought their uncle’s bus ticket, keyed his own telephone number into the booking system.

He (Choo) actually lives in Singapore and came to Malaysia in early May to visit our relatives in Johor and Selangor. He does not have a local telephone number. I could not imagine him being alone in an unfamiliar place without any means of contacting us.

Another kind stranger helped the family

Chau Peng rushed to the Kluang bus terminal to pick up the wallet from Yusof before making her way to Sri Lalang, that’s about 10km away, to look for her uncle.

While driving, she received another call from her sister saying that their uncle had safely returned home after hitching a ride from another kind Samaritan.

When I finally saw him, my poor uncle said he was scared and hungry as he had no money with him and no way of contacting us. We are glad and grateful that everything turned out well in the end with the help of kind-hearted Malaysians willing to go the extra mile to help others.

Choo was touched by Yusof’s honesty and efforts to return his wallet. He asked to meet the young man the following day to thank him in person.

When they met, Choo gave Yusof a big hug and began tearing up. He also wanted to give Yusof and ang pau which Yusof declined.

Yusof finally accepted it after Choo insisted that it was to treat him to coffee. Choo returned home safely to Singapore on Thursday, 2 June.

I also sent a text message to Yusof on behalf of my uncle, who could not stop praising him for his kind deed and wished him well in life.