He was caught on video driving along LDP while holding a ‘black gun’ and pointing it upwards. 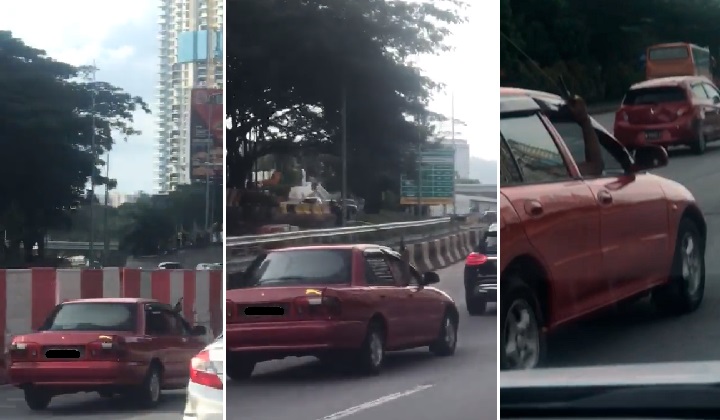 The Police apprehended a male driver for holding a cheap toy gun while driving along the Damansara-Puchong highway, yesterday.

The incident was also caught on video by another driver, which showed the man, driving a red Proton Wira, holding the gun outside of his car while he switched lanes.

The incident occurred nearby the One Utama shopping mall at Damansara at about 6.15pm.

According to Petaling Jaya district police chief ACP Mohamad Fakhrudin Abdul Hamid, the police had managed to trace the suspect to an apartment in Bandar Seri Damansara at 10pm yesterday.

Mohamad Fakhrudin said that the suspect claimed that he have no foul intention and was merely playing with his nephew during the incident.

“The suspect claimed that the toy pistol, purchased at RM2.40, belonged to his four-year-old nephew and claimed that he was playing with his nephew at the time of the incident,” Mohamad Fakhrudin said in a statement today.

Mohamad Fakhrudin said the suspect, who has a past record for crimes, was remanded today and is being investigated for offences under the Firearms Act.

He said that the police also seized the toy pistol and the car that was involved in the case after arresting the suspect.

Mohamad Fakhrudin also added the suspect, who has a past record for crimes, was remanded today and is being investigated for offences under the Firearms Act.