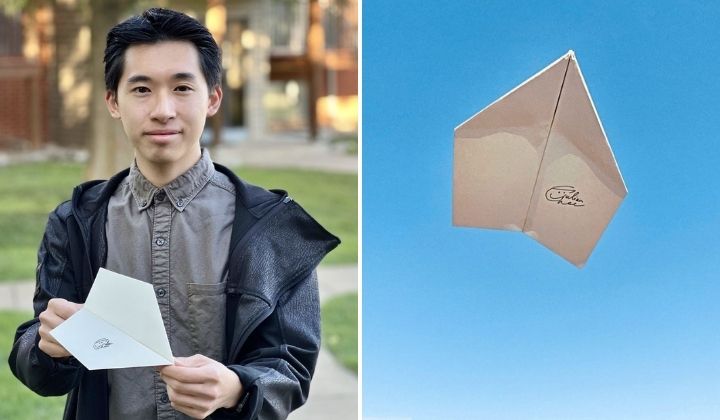 Many of us have folded paper airplanes when we were younger to pass the time. We never thought it would be something that could break records.

For 24-year-old Julian Chee Yie Jian, his childhood dream was to design paper planes that could fly higher and longer.

Recently, Chee did just that and put Malaysia on the world map by earning the Guinness World Record (GWR) in the “Farthest flight by a paper aircraft” category in Daegu, Gyeongsangbuk-do in South Korea on 16 April 2022.

The Star reported that his paper plane design flew 77.134m, beating the previous record of 69.14m held by Americans John Collins and Joe Ayoob in 2012.

It feels long overdue to put Malaysia in the GWR. It’s no moonshot but I represent Malaysia to the best of my ability. It’s definitely not going to be my last.

Surprisingly, he admitted that he expected to break the Guinness World Record. Back in 2019, he tested his design in an airplane hangar and it hit approximately 90% of the 2012 record distance on the first day.

He knew then he just needed to tweak and improve his design.

Putting in the work

No man is an island. Chee, a design engineer with Airbus, teamed up with his South Korean friends Kim Kyu Tae and Shin Moo Joon to work on the challenge.

Each person has an area to focus on – Shin (a paper aircraft veteran) folded the plane, Kim was the thrower, and Chee was the designer.

Together, they dubbed themselves the ‘Shin Kim Chee Team.’

Initially, Chee didn’t continue the project because he was bogged down by school and work. Shin knew his design and introduced him to Kim with the plan to break the record.

Chee said the community in South Korea also started noticing his design, so they decided to get in the record books quickly.

The secret ‘ingredient’ was to balance the mass of the paper airplane and the size of its wings. Months of research went into designing the best plane design to achieve higher and further flights.

Even throwing the paper airplane is complex because thrusting it at high speeds can distort and damage the wings.

The heavier the paper, the more inertia it possesses to keep it going, and the better the structure. The smaller the wings, the faster it flies too. For this application, the wings must be sized so they can still glide at a particular speed, or they’ll just hit the ground like a dart.

The winning design was a smaller plane with more layers compacted into the wing, making it stiffer and less prone to distortion.

This resulted in the winning paper airplane design gliding from a higher altitude instead of an aggressive swoop downwards to pick up more speed.

It also required a lot of trial and error because each throw is different. It’s sort of like an experiment to learn from and a great outlet to let the mind wander and figure out how the world works.

His future projects include designing, building and launching a small but efficient rocket into space. Right now, he’s in the midst of studying and writing the analysis code and learning how to manufacture rocket propellant.

It would take a few more years to realize his dream but there’s no doubt that he would achieve it.