Everyone tried to locate her but failed to find her. 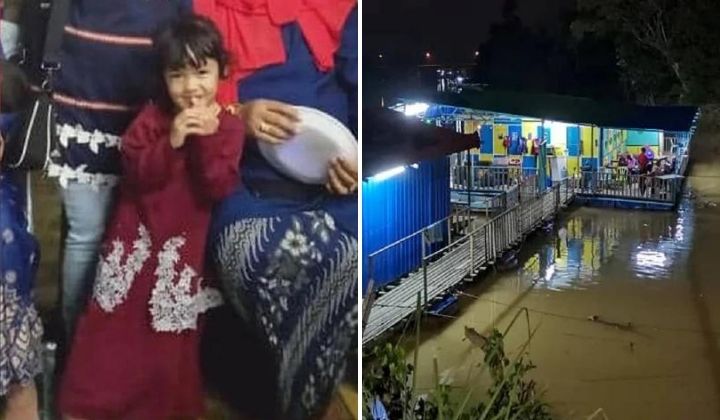 A joyous Hari Raya Aidilfitri celebration turned disastrous for a couple when their 3-year-old daughter went missing on a floating raft house along Sungai Bukit Rangin in Kuantan last night (27 May).

New Straits Times reported that Siti Nur Athhiyya Soffea Mohamad Shukri was last seen at the event hosted by her parents at their raft house around 11pm.

Her father Muhammad Sukri Ali, 50, lodged a police report after he and his guests could not locate the girl in the raft house.

Sukri realised his daughter, who wore a red baju kurung, was missing around 11.15pm and immediately alerted the others before they searched the area.

Harian Metro reported that Siti Nur Athhiyya Soffea is the couple’s only child.

Sukri owned two raft houses along the river and a wooden bridge connects both units.

He has also shared news about his missing daughter in several WhatsApp groups but has not received any positive feedback.

The case has been classified as missing person.

Meanwhile, Pahang Fire and Rescue Department deputy director (Operations) Ismail Abdul Ghani said a search and rescue operation is underway to locate the victim along the riverbank and nearby areas in case she fell into the river.