Hospitals in the country have prepared isolation wards to treat monkeypox patients, if there are any. 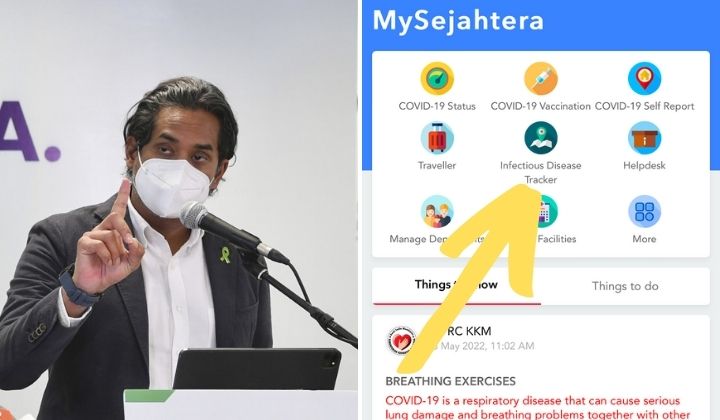 Health Minister Khairy Jamaluddin has revealed that MySejahtera will be reactivated today (27 May) due to growing concerns surrounding the monkeypox virus.

While there are no reports of monkeypox cases in the country yet, reactivating MySejahtera is a precautionary approach to the virus.

During a virtual press conference, Khairy said both health and immigration officers at Malaysia’s points of entry would be on the lookout for monkeypox symptoms in travellers.

These passengers would be referred immediately to the health authorities at the airport.

With MySejahtera reactivated, travellers from countries where monkeypox is endemic and from countries that are not endemic but have reported cases will receive an alert so they can monitor their symptoms for 21 days.

According to Malaysiakini, this is because the monkeypox virus has an incubation period of 21 days.

Earlier this month, MySejahtera’s latest update included an ‘Infectious Disease Tracker.’ This tracker allows everyone to view hotspots of infectious diseases, such as hand, foot and mouth disease (HFMD), dengue, measles, and rabies.

READ MORE: Track More Infectious Diseases Near You With The Latest MySejahtera Update

Khairy added that efforts are underway to increase the diagnostic capability to detect monkeypox.

Currently, he said the diagnostic capacity for the polymerase chain reaction (PCR) test can detect monkeypox.

We will expand our capacity as well as our ability to procure more reagents to ensure that we have the capacity to test for monkeypox using the PCR as well as other molecular testing.

Public hospitals, private hospitals and clinics have been instructed to be ready for early detection of symptoms, including preparing isolation wards to treat monkeypox patients.

Khairy said there are no current plans for mass vaccination against monkeypox. Instead, the Health Ministry (KKM) will take a more targeted approach.

If there’s an outbreak, KKM will carry out a ring vaccination strategy for close contacts and healthcare workers.

We are quite familiar with the protocols for infectious disease – having gone through Covid-19 for two years.

This referred to the protocols of isolation, contact tracing, and using Home Surveillance Orders, which would be replicated if there’s a monkeypox outbreak in the country.

The other strategies include boosting community risk communication to educate the public on the symptoms of monkeypox and how to avoid it.

KKM warned Malaysians in endemic countries or in countries with reported cases of monkeypox to avoid activities that could cause infection such as avoiding the consumption of uncooked meat and staying away from wild animals.

Symptomatic travellers are warned to delay their trips abroad. Malaysians abroad who are showing symptoms were told to get checked at their closest health facility immediately.