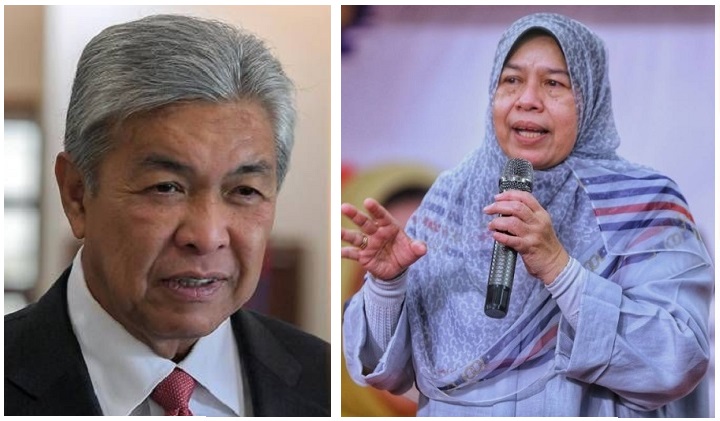 UMNO President Datuk Seri Ahmad Zahid Hamidi reiterated his call for the proposed anti-hopping bill to be expedited and gazetted into law while also calling for party-hoppers to be sacked from Cabinet posts.

Zahid, in his Facebook posting today, said that the public’s trust in political parties and elected representatives will continue to decline due to the ongoing defections of politicians.

“(Allowing politicians) to hop from one party to another will definitely disappoint the rakyat and make it look as if they are no means to control it and that elected representatives are free to do anything,” wrote the former deputy prime minister.

“Such actions will only cause the people’s confidence in their representatives and political parties to wane further. It is akin to toying with their votes,” added Zahid.

He was commenting on the announcement made by Plantation Industries and Commodities Minister Datuk Zuraida Kamaruddin and Parti Pribumi Bersatu Malaysia (Bersatu) supreme council member to leave the party and join Parti Bangsa Malaysia (PBM).

Zahid urged Prime Minister Datuk Seri Ismail Sabri Yaakob, who is also UMNO’s veep, to come down hard on defectors inside the Cabinet, adding that there are many other capable and loyal MPs to replace Zuraida.

“The prime minister must see this as a serious issue and no longer compromise with anyone that hops and then remains in the Cabinet.”

According to Zahid, letting such defections go unpunished only reflects the government’s commitment to introducing the anti-hopping law, which is slated to be tabled at an upcoming special Parliamentary sitting on 7 June.

Zuraida has yet to apply to join PBM

Meanwhile, PBM senior vice-president Steven Choong said that the party has yet to receive the application to join the party from Zuraida.

According to The Vibes, the matter was confirmed by party secretary-general Nor Hizwan Ahmad.

“We can only consider her role when we receive her application to be a member. Everyone has to go through the same process.” Choong was quoted as saying.

Choong, who is also the Tebrau MP, however, welcomes Zuraida’s decision to join PBM, believing that it would further boost the party’s image.

Chong and Zuraida are both formerly from PKR.