The large stuffed toy was pulled out in a flash flood prone area. 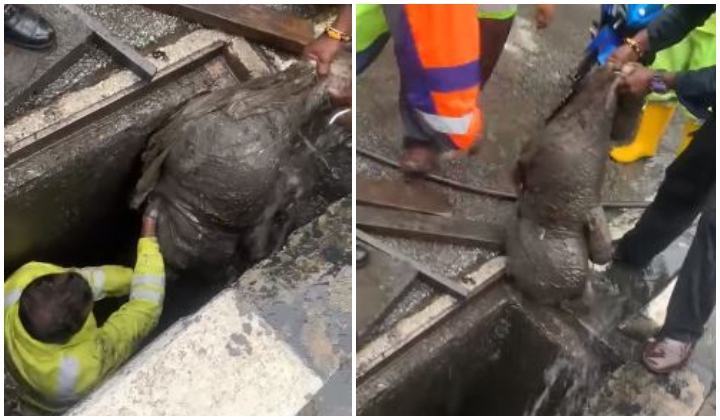 Kuala Lumpur has been flooded a few times whenever there’s a continuous rain downpour. Just yesterday, the rain managed to flood several roads in the city and made certain roads impassable to motorists.

This in turn caused traffic jams and people were stuck in their cars while waiting for the floodwaters to recede.

READ MORE: Several Areas In KL Are Flooded, There Are Still Some Passable Roads

Whenever there’s a flood, people often blame litterbugs for clogging up public drains. A recent video posted by Kuala Lumpur City Hall (DBKL) proved just that when one of their workers pulled out a huge object blocking the drain.

The worker pulled out a large stuffed toy from the drain in Bulatan Merdeka during cleaning works.

Why do you need to dispose [rubbish] in the drain when there are rubbish bins available? When the drains get clogged, flash flood happens. A lot of people will suffer. Maybe they even lose their belongings. Don’t blame the authorities for not doing their work.

DBKL wrote in the video caption.

Netizens were upset when they found out someone threw a large stuffed toy into the drain and potentially causing the clog.

However, they also praised DBKL workers for doing what they can to keep the city streets clean despite the persistent litterbugs.

Maybe it’s time to stop blaming others and start educating everyone not to litter in public but dispose of their trash properly.