The motorcyclist viciously jumped on his victim and continued to punch him in the head when the man was down. 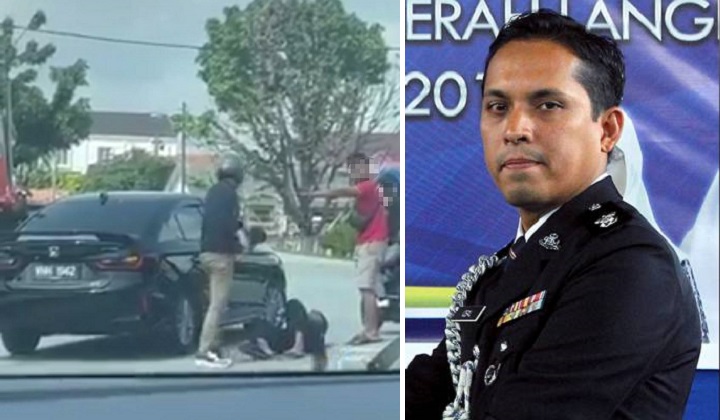 An elderly driver suffered a rude shock after being beaten senselessly to the ground in an incident caught on video.

Following the incident, the police have detained the 23-year-old motorcyclist who brutally attacked the victim in the middle of the road, after the 61-year-old victim came forward and lodged a police report.

In a statement issued yesterday, Shah Alam OCPD Asst Comm Mohd. Iqbal Ibrahim said that the victim was driving his wife and grandchild near the Padang Jawa bridge before the motorcyclist started confronting him.

“When he was turning into Alam Avenue a motorcyclist that was at left side started shouting and scolding the victim,” Mohd. Iqbail said.

“Stopping his car the 61-year-old victim got out of his vehicle to see if there had been any collision but was then kicked by the suspect.

“The suspect pushed the victim down and continued to punch him in the head, leading to swelling and chest injuries,” he added.

The video of the incident had since made its rounds on social media.

The case is being investigated under Sections 323 and 506 of the Penal Code.

Individuals who have information related to the case are asked to contact Investigating Officer Inspector Nur Syuhada Aziz at 018-9124770.

A video was also uploaded on social media showing that the suspect was apprehended by the public following the incident.

Although it was not immediately known what triggers the suspect to attack the victim, several netizens had claimed that the elderly driver too was in the wrong for making a turn without turning on the signal.

[Watch] Motorcyclist Breaks Toyota Vellfire Window With A Spanner, Gets Nabbed The Next Day