The symptoms of monkeypox are similar but milder than smallpox symptoms. 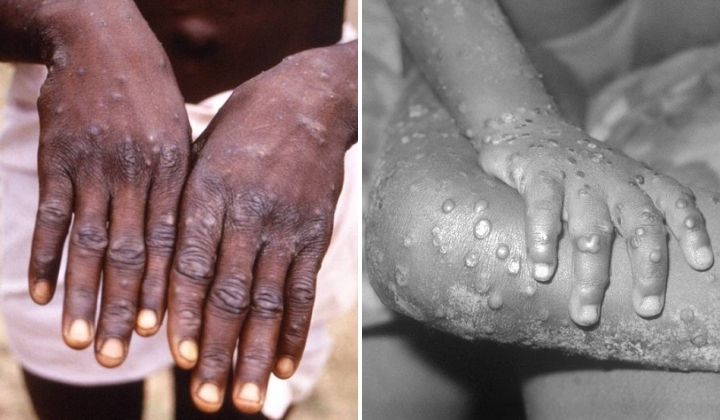 Just when we thought that the Covid-19 pandemic is nearing its end, the rise of monkeypox cases in several countries in Europe and North America made headlines globally.

The news of the disease spread worries many because monkeypox is historically concentrated in the tropical rainforest and rural areas of Central and West Africa.

Free Malaysia Today reported that scientists are baffled by the outbreak but don’t expect it to evolve into a pandemic like Covid-19 because the monkeypox virus doesn’t spread as easily.

Here’s what you should know about monkeypox.

According to Free Malaysia Today, monkeypox is first identified in monkeys. The Centre for Disease Control and Prevention (CDC) said monkeypox was first discovered in 1958 when two outbreaks of a pox-like disease occurred in monkey colonies that were kept for research.

The first human case of monkeypox happened in 1970 in the Democratic Republic of the Congo (DRC) during an intensified period to eliminate smallpox.

How is it transmitted?

The monkeypox virus is transmitted to humans through close contact with lesions, body fluids, respiratory droplets and contaminated materials such as bedding.

The CDC added that the virus enters the body through broken skin (even if it’s not visible), respiratory tract, or mucous membranes (eyes, nose, or mouth).

The reservoir host (main disease carrier) of monkeypox is still unknown. However, African rodents are suspected to play a part in transmission.

What are the signs and symptoms?

The signs and symptoms of monkeypox are similar but milder than smallpox symptoms.

According to CDC, an onset of monkeypox starts with a fever, headache, muscle aches, chills, and exhaustion.

The main characteristics are rashes on the face, palms of hands and soles of feet. The rashes can sometimes spread to other body parts as well.

Monkeypox can also cause lymph nodes to swell (lymphadenopathy).

The incubation period for monkeypox is usually 7 to 14 days but can range from 5 to 21 days. The illness will last about 2 to 4 weeks and can go away on its own.

The lesions will go through the following process before falling off:

A public health expert Dr Hanafiah Bashirun urged the public not to be unduly worried because the complications from monkeypox were similar to chickenpox and the mortality rate was low.

What are the prevention steps?

A good hygiene habit will help lower the chance of getting infected with monkeypox.

Is there a vaccine?

According to virologist Dr Kumitaa Thev Dass of Universiti Sains Malaysia, smallpox vaccination had been proven to be effective against monkeypox since both viruses are closely related.

However, smallpox vaccines were discontinued in the early 1970s after the disease was eradicated.

There’s a vaccine known as Imvamune or Imvanex (JYNNEOS), an attenuated live virus vaccine to combat smallpox, that has been approved by the US Food and Drug Administration.

However, it’s not known if it’s widely available since it’s a rare disease in many countries.

Anyone younger than 50 years old would be at risk since they had probably not received the smallpox vaccine.

New Straits Times reported that WHO guidelines recommend getting the existing chickenpox vaccine which is said to be 85% effective against monkeypox.

Malaysians who are planning to travel abroad are advised to get vaccinated before flying as a precaution.

Where has it spread so far?

According to WHO, the monkeypox has spread to at least 8 countries, namely Australia, Canada, United States, Belgium, France, Germany, Italy, Portugal, Spain, Sweden and the United Kingdom.

The Health Ministry (KKM) is closely monitoring the monkeypox outbreak abroad. So far, the virus has not been reported in Malaysia but staying extra vigilant is crucial.

New Straits Times reported that KKM is carrying out surveillance on suspected cases at all country’s international entry points.

The Institute for Medical Research and the National Public Health Laboratory can carry out tests to detect the monkeypox virus.

The Veterinary Public Health Laboratory and laboratories under the Department of Wildlife and National Park Peninsular Malaysia (Perhilitan) can carry out laboratory tests to detect orthopoxvirus in animals.

KKM is also working with the Malaysian Quarantine and Inspection Services Department (Maqis) and Perhilitan to monitor the monkeypox development situation among the wildlife, including animals that are imported from the African and European continents.