The school principal told the victim’s father that the matter can be settled. 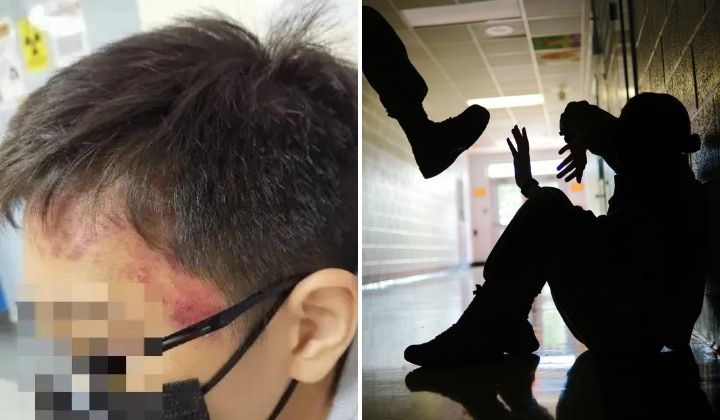 A father is intent on taking action against a group of school bullies and a teacher after his son was attacked at school.

According to Harian Metro, a student asked the teen boy to meet him at the school field. When the teen boy turned up, he was set upon and attacked by a group of ten students.

The group hit, pushed and kicked the lone boy to the ground. He couldn’t retaliate and defend himself.

The boy’s father said his son was repeatedly kicked in the face by the group like they were playing football. Knowing that this happened to his son broke his heart.

Some students tried to help the victim but failed to prevent the bullies from continuing their assault.

His son somehow managed to escape the group and immediately reported it to the school principal.

When I met the school principal, the principal said the issue can be resolved and I was speechless. How can an issue this big be resolved just like that without any action taken? This incident caused my son to suffer injuries on his head, arms, body and left leg.

The boy’s father said and added that his son has yet to heal fully.

Two police reports have been lodged

According to Buzzkini, the boy’s father lodged two police reports regarding the incident and want action to be taken against the bullies.

It wasn’t the first time his son got bullied in the same school. Back in 2019, his son was bullied but the teacher allegedly told him that his son and the bully have made up with each other.

In that same year, the boy was threatened by another student with a knife. The boy didn’t tell his father until April 2020.

After reporting to the school, the student who brandished the knife had reportedly been kicked out of school. The boy’s father said it wasn’t a good enough reason to not take action against the student.

In light of these issues, the boy’s father is determined to pursue a legal case against the bullies and the school authorities if there’s a continued lack of action.

He also doesn’t wish to send his son to the same school anymore.

The police have taken statements from the victim and several witnesses including the teachers.

The case will be investigated under Section 324 of the Penal Code.