The family of five just moved into their new home in Taman Sri Perkasa two days ago. 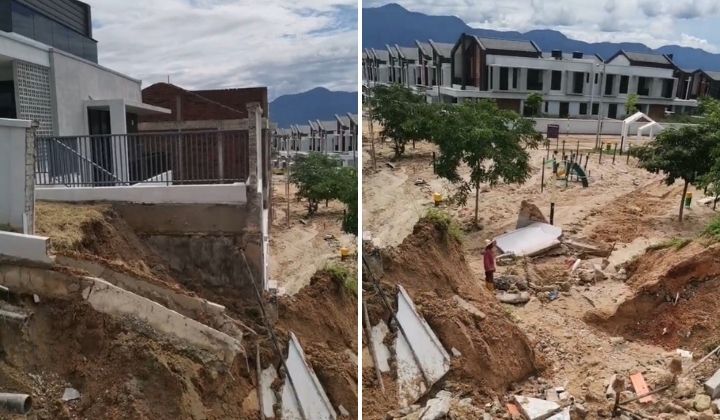 A family of five got a shock of their lives when the perimeter wall of their new home in Taman Sri Perkasa, Ipoh, fell during a landslide. The family just moved in two days ago.

According to The Star, freelance insurance agent Dina Liz Ismail, 37, said part of the slope next to their house on Laluan Lapangan 3 gave way during a thunderstorm just before dawn on Sunday, 15 May.

There was a blackout at about 5am, and we could see muddy water flowing on the road in front of our house and down the slope. At about 6am, the perimeter wall started to crack and then collapsed along with part of the slope.

The firefighters received a call at about 7am. When they got there, they inspected the location and made sure no one was hurt. They also advised the family and two other residents living near the landslide to vacate their homes to be safe.

Dina added that the developer had checked the house’s structure and it’s still stable.

Luckily, the developer said they would repair the damage and put the family up in a homestay nearby for the time being. It’s estimated that the repairs would take up to two weeks.

The potential cause of the landslide

The residents’ association chairman Datuk Zul Zukree Zakaria believed the landslide was caused by a development project nearby that started two years ago.

Since the project started, there have allegedly been several flash floods in the neighbourhood.

The residents’ association hopes that the Ipoh City Council will view the matter seriously and take action before more incidents happen.

Another resident, a former lecturer named Noah Wong, said it was a matter of time before the water entered their houses.

Gopeng MCA vice-chairman Cally Ting said she would meet all the relevant parties, including the developer of the project and the mayor, to find a solution to manage the flash floods in the area.

Former Ipoh city councillor Kok Pak Foo said there had been two landslides along the road and believed the drainage system could no longer accommodate the amount of water that flows through during heavy rains.