Both teams were disqualified after winning due to early starts. 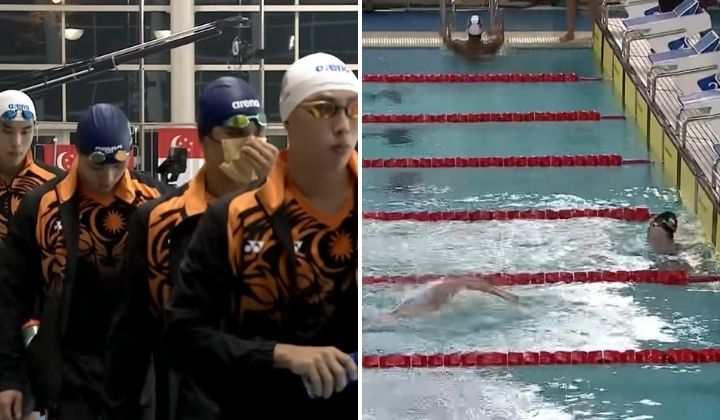 The Malaysian and Singaporean swimming teams lost a silver and gold medal, respectively, after getting disqualified in the men’s 4x100m freestyle relay event at the SEA Games last night (14 May).

According to New Straits Times, both teams were disqualified for early starts at the Aquatic Sports Palace in Hanoi, Vietnam.

Based on initial results, the Singapore team comprised of Joseph Schooling, Mikkel Lee, Quah Zheng Wen and Jonathan Tan finished first with a time of 3:17.19 seconds.

The Malaysia team comprised of Welson Sim, Lim Yin Chuen, Khiew Hoe Yean and Arvin Shaun Singh Chahal, came in second with a time of 3:20.13s, faster than the national record of 3:21:06s set in the 2018 Asian Games.

According to Malaysiakini, national coach Chris Martin said a check with the Omega timing system showed that one of the swimmers plunged 0.12s earlier into the pool.

We are very disappointed because it was a very outstanding relay, a national record time by a lot, but this is what happens, we were overexcited. I told them that missing this medal should make them more determined to step up in the individual events and show that they’re capable.

Over in Singapore, its national head coach Gary Tan told The Straits Times that the disqualification was based on a technicality and it’s not anyone’s fault.

Gary also added that it’s hard to protest the result.

It’s based off a technicality, it’s very tough to make that protest even though we were trying to find a reason and wanted to make sure that this was not an issue of a technical error. I don’t want to put it in a bad way, but there have been a lot of problems with what’s been happening technically on the ground here. We work with whatever the circumstance is and we work with it.