Home Minister Datuk Seri Hamzah Zainudin said there’s no need to review the SOPs surrounding the use of police escorts and outriders. 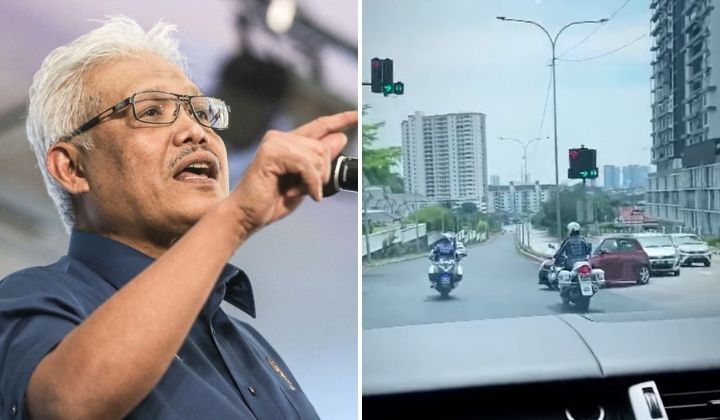 Over the past few days, there have been questions regarding who gets to request to be escorted by police outriders.

According to Malay Mail, Home Minister Datuk Seri Hamzah Zainudin (pic left) clarified that only individuals on a special list or those with permission from the inspector-general of police (IGP) are allowed to have police escorts.

He added that the matter has been agreed upon in Parliament and anyone, whether they’re officers or benefactors, would be investigated if found guilty.

Hamzah also said there’s no need to review the SOPs surrounding the use of escorts and outriders because the issue lies in people using these facilities without permission.

He was commenting on the case of Baling MP Datuk Seri Abdul Azeez Abdul Rahim’s son who allegedly had two police outriders escorting him along the streets of Penang on 6 May.

The matter is being investigated internally and we will announce the findings of the investigation in a day or two.

No orders were given by any senior officers

The two police officers in question have been suspended and transferred to the administrative department pending the outcome of the investigation.

Penang police chief Datuk Mohd Shuhaily Mohd Zain said both officers acted on their own accord as the VIP’s son’s outriders.

He said no instructions were given from any senior officers to both cops to escort a public vehicle.

The son of Baling MP, Mohamed Khairul Anwar, agreed to give the police full cooperation.

The case is being investigated under Section 233 of the Malaysian Communications and Multimedia Commission Act 1998 to see if there are any elements to tarnish the image of the police force.