The group of friends were stuck in between two lorry trailers when the car burst into flames. 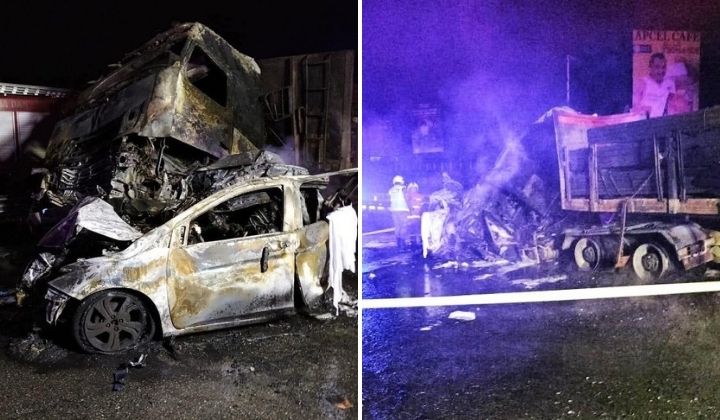 Five students of Universiti Sultan Azlan Shah (USAS) were burnt to death when the car they were travelling in caught fire after a collision with two trailers.

According to Kosmo, the five students were:

The bodies of all victims were sent to the Kuala Kangsar Hospital for post-mortem.

Free Malaysia Today reported that the first trailer and the car were 90% burnt while the second trailer did not catch fire. The three men in the trailers escaped unhurt.

New Straits Times wrote that the group was returning from a holiday in Ipoh in a Honda City. The car slowed down and stopped behind a trailer carrying mosaic tiles.

However, a second 20-tonne trailer laden with iron rods failed to brake on time and rammed into the car and dragged it until it hit the back of the first trailer. The impact caused the car to burst into flames and killed all victims on the spot.

According to Free Malaysia Today, USAS vice-chancellor Nordin Kardi described the students as the best students in the university.

He said the university would help the families by providing accommodation and other necessities until the last rites were completed.

The trailer driver has been remanded

The 28-year-old trailer lorry driver has been remanded for four days as part of investigations.

Perak police chief Datuk Mior Faridalathrash Wahid said the trailer driver from Jitra, Kedah, had 22 traffic summonses issued against him, including for speeding.

The driver’s urine and alcohol tests came back negative.

The case is being investigated under Section 41(1) of the Road Transport Act 1987 for causing death by reckless or dangerous driving.