The driver was accused of being drunk when he drove dangerously on the road. 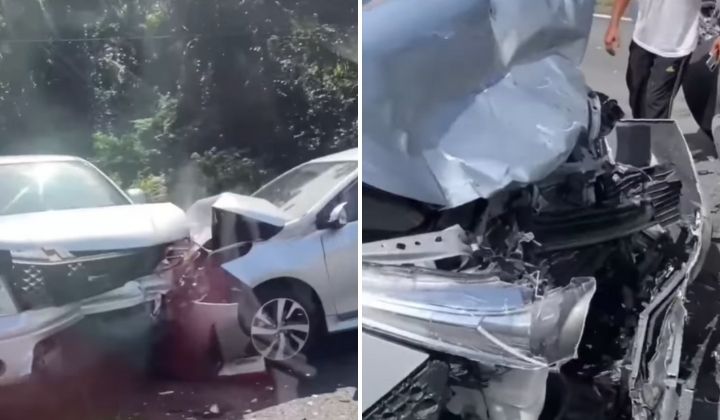 A recent viral video showed an alleged road bully getting into an accident himself. The incident was said to have taken place at Gopeng, Perak.

The Facebook user started recording with his dashcam when a driver seemingly drove too close to him and other road users on the road.

He explained that he started recording the drive in case an accident happened and the video could serve as evidence.

True enough, the other driver in the next lane soon crashed into a pickup truck.

He confronted the driver who was still in the crashed car and accused him of being drunk.

The man in the car could be heard asking what happened in confusion and said he didn’t drink.

It turned out that the driver drove haphazardly because he allegedly has a brain tremor.

A brain tremor or Essential Tremor is a brain condition that causes part of your body to shake uncontrollably.

According to an update in the comments section, the driver in the crashed car is receiving treatment in Hospital Raja Permaisuri Bainun.

This incident also showed that we shouldn’t jump to conclusions quickly and blame someone.

Previously, a lorry driver was accused to be drunk as well and no one sought immediate help for the man.

Unfortunately, it was revealed that the lorry driver suffered a heart attack and might have had a chance of surviving if he had received aid.

READ MORE: “Drunk” Lorry Driver Crashes Into Cars In Sungai Buloh, Turns Out It Was A Heart Attack