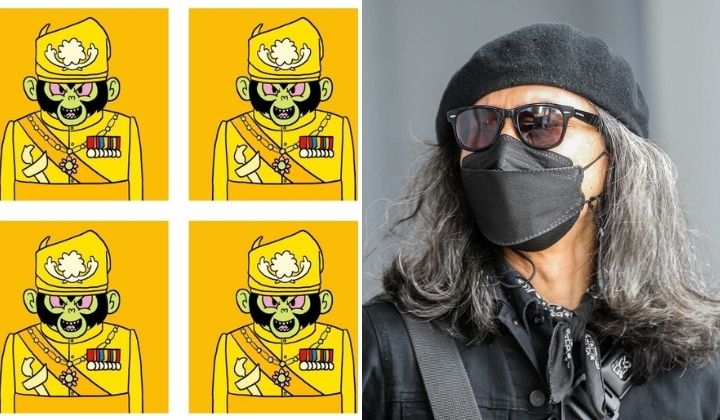 After announcing that he has been banned from leaving the country, satirical artist Fahmi Reza has decided to sell his artwork as an NFT to raise funds to help others get legal aid.

The NFT artwork titled Monyet Istana (Palace Monkey) will be sold for 0.05 BNB, with all the proceeds going to the Freedom of Expression Legal Defence Fund.

The legal fund will help support fellow Malaysians who are investigated and prosecuted for exercising their right to freedom of expression.

The artist said he would not take a single cent from the NFT sale. The sale of Monyet Istana will be launched on 26 April.

Fahmi was arrested and interrogated for two days by the police after uploading an artwork showing Powerpuff Girls’ Mojo Jojo in clothes resembling royal garments.

It was believed to be a satirical response to the news of the Sultan of Selangor purchasing a painting that depicts MPs as monkeys, apes and frogs.

Since last year, he has been arrested 3 times and interrogated 11 times by the police. Currently, he faces two criminal charges over his political graphics.

Some netizens expressed their support and enquired how they could purchase the artwork.

Previously, the artist refused to sell his artworks as NFTs because he wasn’t doing his artwork to gain profits. Fahmi said his artworks aim to raise political consciousness for free.

His change of heart took a few netizens by surprise and caused temporary confusion.

Please stop asking me to sell my political graphics as NFTs. If you seriously want to support my work, and want me to continue creating satirical graphics on Malaysian politics for EVERYONE, you can support me at Patreon or Buy Me A Coffee.