MACC explained that the officer acted accordingly because the group that arrived went against the law. 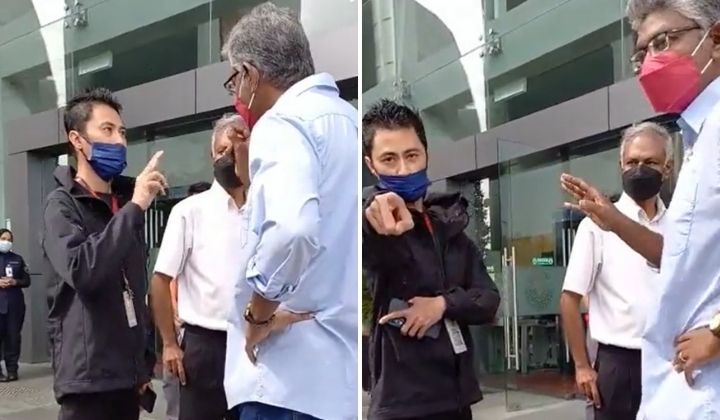 A viral video recently showed a Malaysia Anti-Corruption Commission (MACC) officer shouting at a man outside the MACC headquarters in Putrajaya yesterday, 21 April, around 11am.

When the man questioned the MACC officer’s authority, the officer said he was the safety officer and unzipped his jacket to show off the tag around his neck.

The man then tried to have a calm conversation and told the officer to lower his voice.

The officer cut the conversation with the man short and pointed at the person recording to stop filming the incident and delete the video.

Netizens criticised the MACC officer for shouting and behaving rudely to a member of the public. Some alleged that the officer’s behaviour is a reflection of the whole organisation.

They added that as a public officer, he should have learned how to listen and sensibly approach a person when they’re on duty.

Such behaviour is reflective of the whole institution. No wonder…

There is always a sensible way to approach anyone when you are on duty. You may be an officer but you need to learn how to listen and have some sense of empathy. Going after someone who is recording show poor character. Recording in public space is not an offence (Section 509).

MACC released a statement to further explain what went down that day and said its officer acted accordingly.

The MACC Security Division said that only three representatives are allowed to enter the compound and meet the officers on duty to lodge complaints, as stated under the Protected Areas and Protected Places Act 1959.

However, 25 members of Parti Sosialis Malaysia (PSM) turned up and 7 of them entered the compound in pairs right up to the main entrance of the building.

Video recordings and cameras are not allowed in protected areas without the permission of MACC’s higher management.

The group did not comply with the Act because they also recorded a video while standing within the compound and the MACC building.

Nevertheless, MACC takes the matter seriously and will conduct investigations on the alleged incident. If there’s misconduct, MACC will take appropriate action.

According to Malaysiakini, the other man in the video is PSM secretary-general Sivarajan Arumugam.

Several PSM members and Perak farmers visited the MACC headquarters to lodge a complaint about the suspected misappropriation of government land affairs in Perak.

Among those who were present were PSM chairperson Dr Jeyakumar Devaraj and Kanthan farmers representative Tan Tean Chee.

MACC confirmed that it has received information from Jeyakumar regarding the allegations of misappropriation of Perak government land affairs.

MACC will review the information before taking any further action.