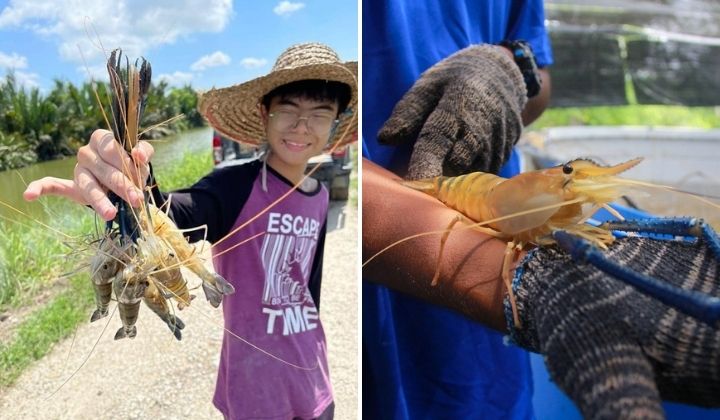 Large freshwater prawn (udang galah) is one of Malaysia’s well-loved local delicacies. In fact, Malaysia is the first country in the world to breed freshwater prawns successfully and has commercially farmed these prawns since the 1960s.

However, few local farmers are keen to grow these freshwater prawns because the traditional breeding method produces a low yield.

Fortunately, a Malaysian company GK Aqua used the wonders of biotechnology to manage this problem.

The problem with traditional breeding methods

In order to understand how they did it, we must first understand why the traditional breeding method is not efficient.

In a typical udang galah mixed population culture, the ratio of males to females is 30:70.

On top of getting no guarantee of productivity rates, these prawns might face harm from diseases, affecting the population of prawns and thus, the yield.

How did they solve it?

GK Aqua managed to use biotechnology intervention to create an All-Male Breeding Prawns, aka neo-female prawns. What’s that?

Believe it or not, neo-female prawns are male prawns modified to be able to bear eggs and create spawn that is all male.

The genetically improved prawns have brought benefits such as:

According to GK Aqua, they have an easy-to-scale model that allows farmers with a pond to set up and adopt the new breeding method quickly. They’ll supply the fry to the farmers too.

GK Aqua also buys back the fully grown prawns from the farmers so that the farmers do not need to do their own marketing or handle logistics.

The freshwater prawns would then be sold under GK Aqua’s brand name M’Ros to consumers and businesses via seafood retailers and exporters.

Where is it grown?

So far, GK Aqua has enrolled 20 farmers with medium to big-scale farms in the freshwater prawn joint venture programme. They also included marine farmers, and they have successfully grown freshwater prawns in water with a salinity of 10 PPT.

The company has been working closely with the state government to develop Negeri Sembilan into a recognized “prawn valley” and create more entrepreneurship opportunities for Malaysians.

To cement Malaysia as the country of origin for freshwater prawns, GK Aqua has focused production in the country instead of setting up facilities in China and Singapore.

To date, GK Aqua’s freshwater prawns have been exported to countries such as Mauritius, Cairo and Dubai to cater to the market demand.

If everything goes well, Malaysia will be world-renowned as the country of origin for top-quality freshwater prawns.

This ‘Agro-Culture’ Summer Camp Invites Everyone To Be Farmers