In light of recent events, having a dashcam proves more important than ever. 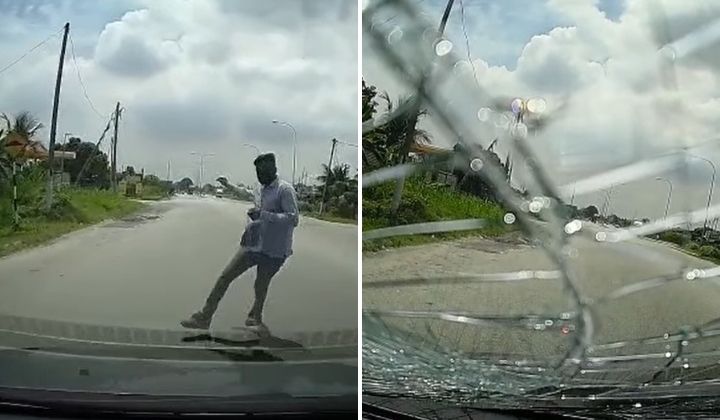 The importance of having a dashcam was made apparent when a woman, Sam Ke Ting, was charged for running into 8 teens on ‘basikal lajak’ and causing their deaths.

A separate incident further supports the need for a dashcam in cars. In the video caught on dashcam, a man suddenly threw himself on a car that was coming up the corner of a road in Klang heading up to Kapar.

The impact cracked the windscreen and the man slid to the ground when the car came to a stop.

Not long after, some members of the public gathered around the ‘victim’ to help him up. Without a dashcam, it might seem that the driver knocked the pedestrian and there were witnesses of the accident although it was a sham.

The driver told the group to wait for the police because he has dashcam footage. Luckily for the driver, the group immediately dispersed upon hearing this.

According to paultan.org, the police allegedly said it’s a modus operandi used by scammers to extort unsuspecting motorists.

Since there’s no way to fully avoid scammers, extortionists and road ragers on the road, having a dashcam offers some protection for drivers.

In light of recent events, it’s time to equip your cars with front and rearview dashcams to be safe because you’ll never know when it happens to you.

The suspect has been caught

Berita Harian reported that the pedestrian in the video has been caught.

A 25-year-old man has been arrested at his workplace in Jalan Shahpadu in Rantau Panjang, Kelantan around 10am today (15 April).

The incident is said to have occurred at Jalan Goh Hock Huat on 7 April and the driver lodged a police report at 12pm on the same day.

The police said the suspect would be remanded to assist in investigations. They also believe the suspect acted on his own and was not part of a syndicate.

The case is classified under Section 336 of the Penal Code.