A father shared how he and many fathers had to use the women’s restroom to change their baby’s diaper. 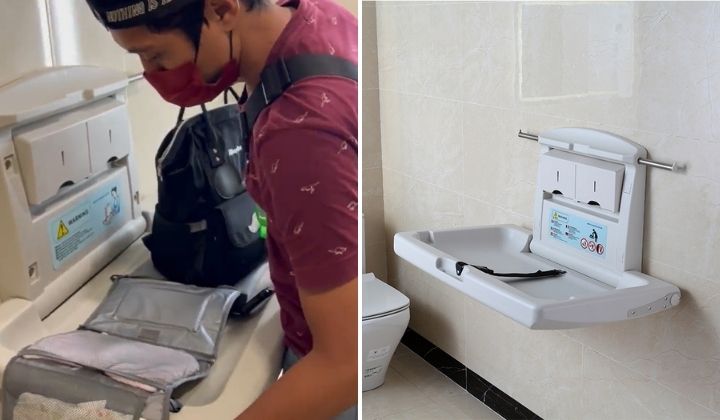 Parenting is a shared responsibility for both mother and father. However, sometimes public facilities for families are still stuck in outdated beliefs.

A Twitter user and father Mustakim (@mustakim_ismail) recently voiced his disappointment when he couldn’t help change his baby’s diaper in the men’s toilet. This was because there was simply no diaper changing table in the men’s room.

He had no choice but to enter the women’s toilet to use the diaper changing table there. For most fathers, they would understand why that was uncomfortable and could be a problem.

Mustakim said the responsibility to change a baby’s diaper is not only a mother’s duty. He urged the designer or architect to think of fathers, especially single fathers, when they build public facilities in buildings such as shopping malls.

Segambut MP Hannah Yeoh voiced her support regarding the matter too. She said it’s a collective responsibility and it’s time to change outdated beliefs regarding gender roles.

Parents online voiced similar issues too and fathers shared the challenge they face when the facilities provided for fathers are non-existent or badly designed.

Netizens believe that the diaper changing table should be available in both male and female restrooms.

I feel you. I had to change my kids diapers in the toilet too previously. It’s mostly the older malls without a specific baby room. A lot of the malls also has a sign stating “only mothers and baby”. What if the father has to change the diaper or feed the baby too?

They also shared several locations with great facilities for both parents to help other families.

Some of the places parents gave their two thumbs up are:

Hopefully, the facilities for fathers will be improved soon to help families when they are out and about.