The fan was furious after Selangor FC conceded a goal in the stoppage time to Kedah Darul Aman FC. 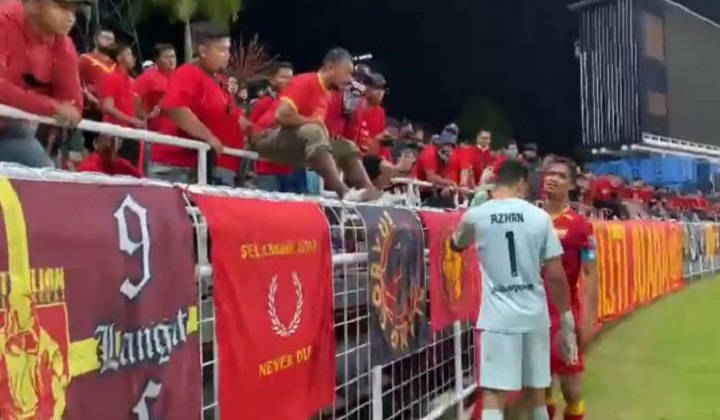 Selangor FC stand-in skipper Safuwan Baharudin was scolded and verbally abused by a fan at the MBPJ Stadium, despite helping the Red Giants to its maiden victory in the Malaysian Super League (MSL) last Sunday.

After Selangor FC match against Kedah Darul Aman FC (KDA FC) ended, with the home team recording a 4-1 victory, a Selangor FC fan started to berate the team for failing to keep a clean sheet during the game.

When Safwan approach the home team section to calm down other players who reacted to the fan’s criticism, an unidentified man shouted expletive remarks toward the Singapore international, which almost caused him to retaliate before he was led away by the teams’ officials and players.

During the match earlier, Selangor FC was comfortably leading 4-0 before they conceded a goal in stoppage time to KDA FC. In the previous two matches, Selangor FC could only muster two points after drawing both games.

This is also KDA FC first loss of the season, after recording three straight wins in the MSL.

The video recording of the incident has since gone viral on social media.

Meanwhile, Safuwan took it to Instagram to reflect on the incident, saying that he will always strive to lead the team as best as he can while the original team captain, Brendan Gan unavailable for selection.

“As long as @brendangan, the real captain of the team is not back yet on the field, I will always try my very best to protect the players on and off the field.

“But if an incident like yesterday happens, it’s a bit disappointing for me. Words that come out of your mouth, say so many things about you as a person brother.

“Let’s all move on from here, keep supporting the team no matter what. In the end, we are human after all. Be positive always. I forgive you,” he wrote in his Insta Story update.

Brendan himself reacted to the incident and said that “I will always back my brothers up! I’ve been through too many challenging times to let negativity find its way to this team,” the midfielder wrote on his Instagram Story.

“The words spoken to @safuwanbaharudin should never have been spoken, I’m disappointed with those who think this is ok! As this is not who we need or want as supporters,” he added.