The woman, believed to be the mother, walked by like nothing serious happened. 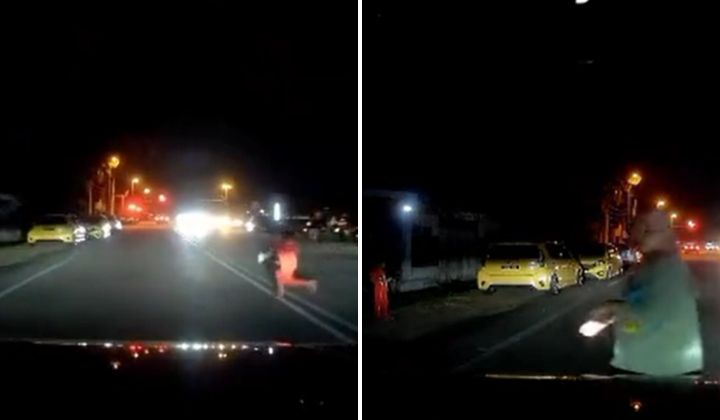 Parents are always reminded to watch their children like hawks, especially when it comes to crossing a busy road. Young children are still learning about the world, and they might not be aware of the dangers if they cross the road blindly.

A netizen recently shared a video showing a young boy almost getting hit by a car when he ran across the road out of the blue.

The dashcam recorded the boy in red clothes suddenly making a dash in front of a moving car. Both the driver and passenger let out a shriek as it happened.

Fortunately, the car managed to stop in time but it was a pretty close shave.

A woman, believed to be the boy’s mother, slowly strolled in front of the car and just turned to look at the driver instead of showing any signs of worry for the boy. Walking with her was another woman holding a baby.

A man on the left side of the road could be seen gesturing towards the car, presumably telling the boy to be careful next time.

It was not known if the boy’s mother told off her child in private after that.

Netizens couldn’t accept the inaction of the adults. One of them said the adults could have at least shouted a warning and apologised to the driver.

They also think that irresponsible parents should be caught and charged with child negligence.

Given the hands-off approach, there’s also a chance that parents like these would still blame others if their children got hurt.

Nevertheless, netizens were grateful that the driver wasn’t speeding and managed to brake in time.

May this near-miss incident serve as a good reminder to parents to be vigilant about their children’s behaviours.