She said that it’s also important to choose the right diving instructors and diving schools. 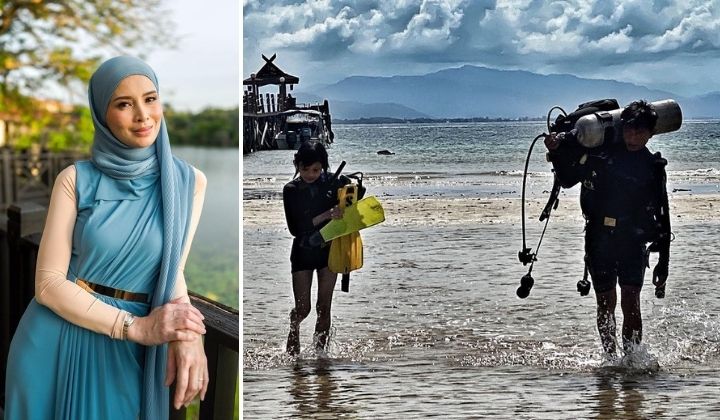 News of the missing divers in Johor for the past few days has some people doubting the safety of scuba diving.

It worried more people, especially parents, when the 14-year-old diver Nathen Renze Chester didn’t survive the ordeal after floating in the sea for days.

Malaysian television personality Daphne Iking shared on Instagram about her family taking up scuba diving despite knowing the potential risks of the extreme sport.

Iking said that she had discussed in-depth with her husband, Azmi Abdul Rahman, before signing up their children for the junior open water course.

She added that choosing a skilful diving instructor and diving centre play a crucial role in ensuring safety.

As such, her family has flown back to Sabah previously just so they could be trained under a trusted dive instructor.

She’s not giving up diving

Iking, who has recorded over 100 dives, also shared that even adults face problems underwater.

There was a time when her mask came off underwater and she lost control of her breathing. She became disoriented so she made an emergency ascend.

She lost her confidence and self-esteem after the experience. However, she went back for the second dive to face her fears and loved scuba diving.

While the case planted doubts about whether they should go on a family dive together, Iking said she wouldn’t give up diving.

Iking said that it was a timely reminder to be mindful, be respectful of our surroundings, and never slack on safety checks.

What to do when you’re in trouble in the water?

Since there’s no way to fight strong currents, Project Life Aquatic shared some helpful tips that could be useful when you’re caught in a bad situation: