The group resurfaced after the second dive but was pulled away from each other due to strong currents. 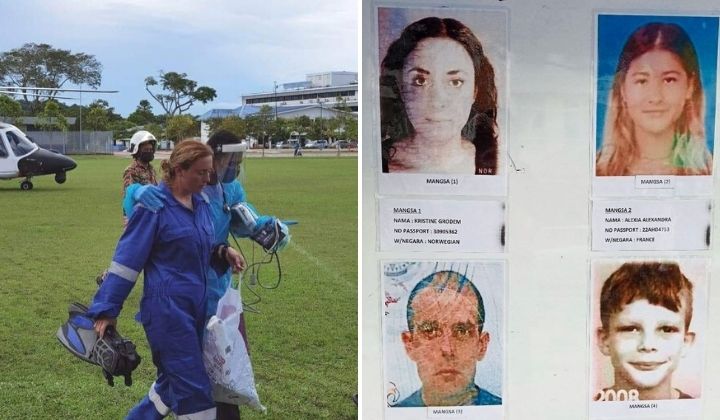 A 35-year-old Norwegian woman, Kristine Grodem, has been found safe yesterday (7 April) 20 hours after she and three other European tourists went missing off the coast of Mersing, Johor, during a diving trip.

A crew on a tugboat that was travelling from Indonesia to Thailand spotted her around 8.15am and pulled her on board.

She was then airlifted to Mersing Hospital. According to The Star, Grodem was in stable condition and did not suffer any serious injury.

They were undergoing a diving course in advanced open waters with Grodem as their instructor.

The group made the first dive for 45 minutes before emerging on the surface. On the second dive, they resurfaced after 20 minutes but were pulled away from each other by a strong current.

Grodem frantically called out to the boat skipper but she could not be heard because they had drifted about 500 metres away from the boat.

The Star reported that she tried to swim to Pulau Lima to get help but was unable to due to strong currents.

She was later found drifting at Tanjung Sedili waters near Kota Tinggi by the crew on a tugboat with her diving equipment intact.

Mersing police district police chief Superintendent Cyril Edward Nuing said there’s a good chance to find the other divers safe because they’ve resurfaced and are experienced divers who have recorded over 50 dives.

Therefore, we believe the chance for us to find them alive (and well) is very good based on their experience and with diving equipment (fins, vest) and supplies on them.

The SAR operation is still underway

In the meantime, the sultan called for all diving activities off Mersing to be banned temporarily until it’s safe for diving.

I want all diving activities in the waters off Mersing to be temporarily halted until we know for sure what happened to the unfortunate divers. We cannot allow diving to continue if safety measures are compromised. Diving rules and regulations must also be reviewed in their entirety before these activities can be allowed to resume.

Sultan of Johor Sultan Ibrahim Sultan Iskandar, as quoted by The Star.

Sultan Ibrahim said reviews must be made public once they are completed to restore public and tourist confidence.