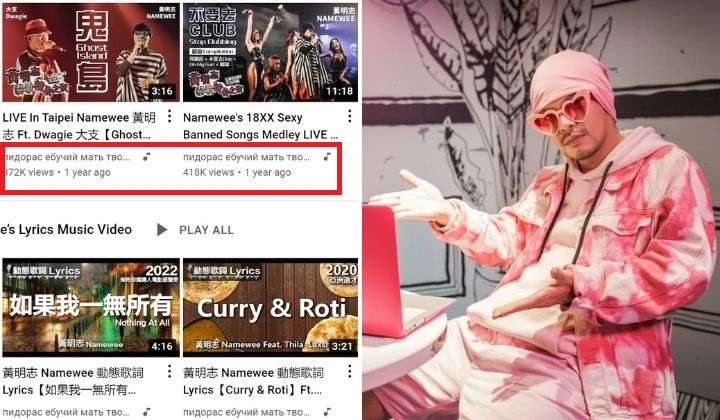 Malaysian rapper and filmmaker Namewee was recently targeted by a hacker. According to Malay Mail, Namewee lost almost 1,000 videos on his YouTube channel overnight.

The title of his YouTube channel was also changed from ‘Namewee” to a sentence in Russian.

The rapper’s management team has reached out to YouTube for assistance in restoring his music videos and comments after they all vanished.

Namewee started his YouTube channel in 2006 and successfully garnered over 3.27 million subscribers and a billion more views before it was hacked.

He lamented about the attack in an Instagram video and left some choice words for the hacker.

It’s 10 o’clock in London right now and my YouTube channel has been hacked by someone from Russia. I’ve managed this channel for 13 years already. It’s a very long journey but everything’s gone now.

Namewee said before ending the video with an explicit message in a foreign language to the hacker.

At the time of writing, some videos have been restored on his YouTube account while there are still several videos with Russian words.

Not a stranger to controversies

Namewee is not a stranger to controversies for his music and films. He was in hot water last November after his song Fragile was pulled from music streaming services in China just a day after its release.

According to Focus Taiwan, the Weibo accounts of both Namewee and Kimberly were banned and their songs were all removed online.

The music video was viewed over 10 million times and trended at number one on YouTube in Taiwan and Hong Kong.

He promised to continue producing entertaining content and thanked everyone for their support.