Prasarana is also carrying out a internal investigation and said the employees broke the company’s code of conduct. 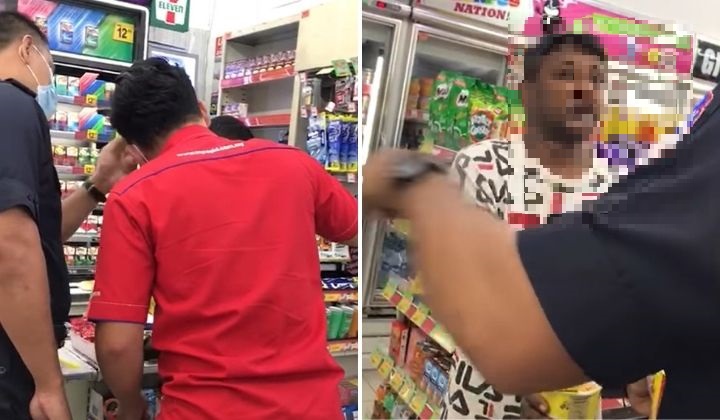 A viral video that went viral recently showed two people, believed to be Prasarana employees, assaulting a member of the public at 7-Eleven in Bukit Bintang.

The victim is believed to have taken items from the convenience store without paying and was in a drunken state.

One of the men in the red shirt kept asking the alleged thief to pay for the items and dragged the victim by his collar when he tried to run away.

The Prasarana employee in a red shirt then started hitting the victim when he didn’t attempt to pay.

The second Prasarana employee in a blue uniform continued asking the victim to pay for the food (presumably the two opened cup noodles in his hands) before leaving the store.

The whole incident was recorded by another member of the public who uploaded it to her TikTok account @madamluniey on 25 March.

According to Free Malaysia Today, police are investigating the case under Section 323 of the Penal Code and have taken statements from four witnesses.

Malaysiakini reported that Prasarana has also launched an internal investigation and is taking the matter seriously.

In a statement, Prasarana said the employees who assaulted the victim have violated the company’s work ethics. They added that the employees should have called the authorities instead.

Prasarana also urged anyone who witnessed the incident to call 03-78852585 or email suggest@rapidkl.com.my.

Prasarana also apologises for this incident and assures appropriate follow-up action will be taken to ensure that such things will not happen again in future.

Prasarana said in a statement.