The boy said that he was afraid to speak up to his teacher that he wanted to be his class’s monitor. 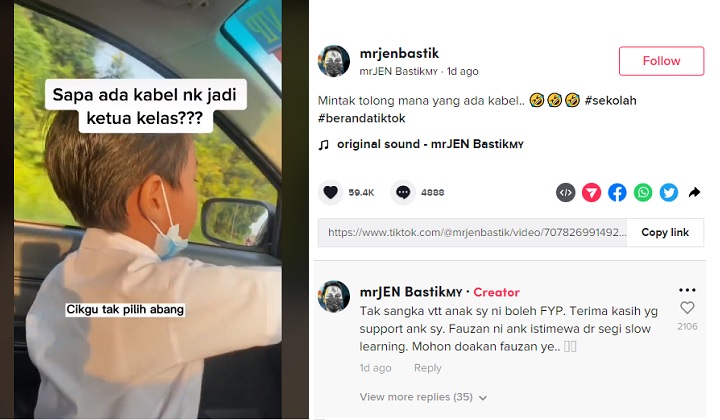 A seemingly upset schoolboy who wanted to be his class monitor pleaded to his father to persuade his teacher to appoint him.

TikTok user @mrjenbastik posted a video of the conversation he had with his son, which went viral on social media and will surely make you sympathise with his son, Fauzan.

“Abang want to become the monitor…but the teacher doesn’t pick me, he picked Aqil Hasif (instead). Aqil Hasif je! (only)” Fauzan told his dad.

When asked why he didn’t volunteer for the post, Fauzan, who has a slow learning disability, said that he is afraid that it will annoy his teacher.

Fauzan then persuaded his father to personally send his teacher a WhatsApp message to change his mind and appoint him as the class monitor instead.

His father tries to console him and jokingly said that upon watching the video, his teacher ‘Cikgu Zaim’ will appoint Fauzan as the class monitor.

Netizens were clearly amused with the video and rallied behind Fauzan to be appointed as the class monitor.

TikTok user @ardazainudin jokingly asked Fauzan’s classmate who had been appointed as the class monitor to step down.

While another user @dr.hadiothman lauded Fauzan’s spirit and foresee that he will make himself known to the whole school in the future.