She only found out after she was removed from the work Whatsapp chat without any warning. 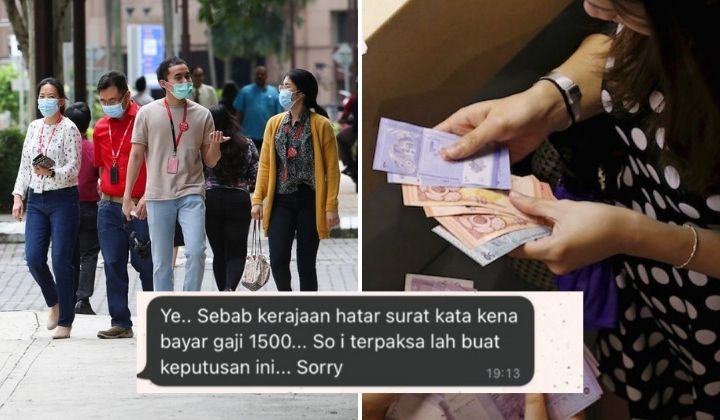 The minimum wage will be officially increased to RM1,500 on 1 May 2022 and some employers are not happy about it.

A TikTok user Sya recently posted a video showing a series of messages from her boss who allegedly fired her without advance notice.

The video went viral with 292.5k likes at the time of writing.

Sya shared that it all started when her boss removed her from the work Whatsapp group.

When she asked why she was removed, her boss apologised and said it was because the government has sent a letter to raise the minimum wage to RM1,500.

She was also told that she didn’t need to come in for work the next day.

However, the boss said she would continue paying her salary like normal on 5 April 2022.

Netizens advised Sya to check her offer letter because she was terminated without notice.

They also suggested that she lodge a report at the labour office because she was unceremoniously fired.

They advised her not to delete the messages from her boss and to bring along the necessary documents such as her employment letter and payslip with her to the labour office.

Once lodging a report, the employer should pay Sya her three months’ pay at the very least.

Another netizen shared that she might be able to get five months’ pay while looking for another job.

To do this, she’ll need to register herself online in the Employee Provident Fund (KWSP) or Social Security Organisation (PERKESO) portal.

Minimum Wage Officially Raised To RM1,500 On 1 May