The three children in school uniforms enjoyed the breeze outside without any fear of danger. 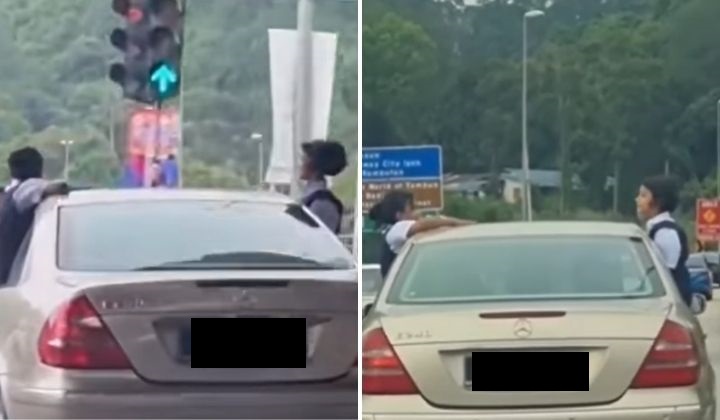 Perak police are investigating a viral video that showed three children sticking their upper bodies out of the windows of a moving car near Caltex petrol station in Jalan Tambun, Ipoh, Perak.

The viral clip was posted on the InfoRoadBlock Facebook page and showed the three children, who were still in school uniforms, leaning out of the car window without a care in the world.

After a few minutes, two children went back into the vehicle but the third child continued enjoying the air outside. It’s not known whether the adult in the car tried to get the children back inside.

New Straits Times reported that someone has lodged a police report about the matter. State police chief Datuk Mior Faridalathrash said the actual date and when the incident occurred have yet to be ascertained.

The case will be investigated under Section 336 of the Penal Code for committing an act that could endanger the personal safety and that of others; and Section 31(1)(a) of the Child Act 2001 for mistreatment, neglect, abandonment, or exposing the child to harm.

Anyone with information is encouraged to contact the senior investigation officer Assistant Superintendent Yap Siew Cheng at 012-9093362.

The father has been arrested

The police have arrested the father of three at Sunway City around 9.30pm on 24 March.

READ MORE: Father Of 3 Arrested In Ipoh For Child Endangerment, He Has 32 Prior Traffic Offences